Macy Gray Insists U.S. Flag Should Be Redesigned as It 'No Longer Represents Democracy and Freedom'

In an op-ed for Market Watch, the 'I Try' hitmaker argues that 'it's not fair to be forced to honor' the flag that is 'tattered, dated, divisive and incorrect.'

AceShowbiz - Macy Gray seemed to believe that a flag should be altered to reflect the country's diverse population. The "I Try" hitmaker has voiced her opinion about redesigning the U.S. flag as it "no longer represents democracy and freedom."

In an op-ed in honor of Juneteenth published Thursday, June 17 on Market Watch, the Grammy Award-winning R&B and soul musician insisted that the American flag "has been hijacked as code for a specific belief." She wrote, "God bless those believers, they can have it. Like the Confederate, it is tattered, dated, divisive, and incorrect. It no longer represents democracy and freedom."

"It no longer represents ALL of us," Macy argued. "It's not fair to be forced to honor it. It's time for a new flag." The 53-year-old singer went on to explain reasons why she believed it's time for a new flag. "Let's look to the stars. There are 50, where there should be 52. D.C. and Puerto Rico have been lobbying for statehood for decades. Both have been denied, since statehood would allow each territory's elected officials seats in the house."

Of the "stripes" on the U.S. flag, Macy said, "Smithsonian documents that the 'white' stripes represent purity and innocence." She said, "America is great. It is beautiful." She then added, "Pure, it ain't. It is broken and in pieces."

"What if the stripes were OFF-white?" the "Why Didn't You Call Me" singer questioned. "What if the stars were the colors of ALL of us - your skin tone and mine - like the melanin scale? The blue square represents vigilance and perseverance; and the red stripes stand for valor. America is all of those things," she stated.

Macy then introduced a picture of her own redesigned American flag, complete with 52 stars in a range of colors from light peach to dark brown and stripes that are light gray instead of white. "So, what if those elements on the flag remained? What if the flag looked like this?" she proposed. 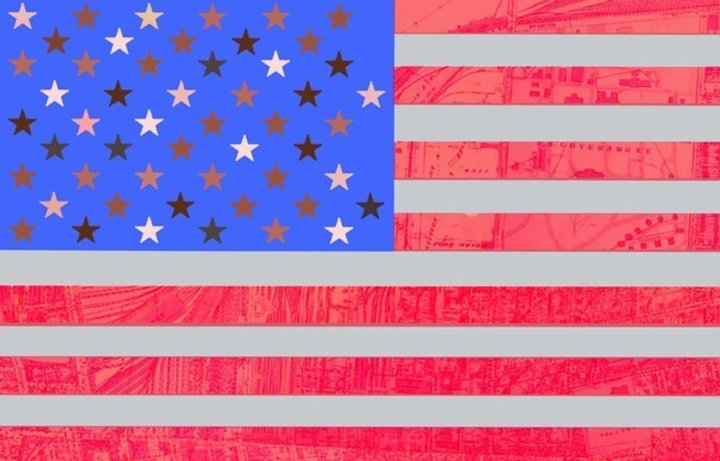 In the piece, Macy went on to describe the history of the flag, which was designed by 17-year-old Bob Heft for a school project in 1959, when there were just 48 states in the country. "Hawaii and Alaska were up for statehood and Bob had a hunch they'd get the nod," she penned. "He crafted a NEW flag with 50 stars for the then-future, because things had changed."

Macy concluded her op-ed by saying, "Sixty-two years later, in 2021, we have changed and it's time for a reset, a transformation." She stressed, "One that represents all states and all of us." The post was published the same day President Joe Biden signed into law legislation making Juneteenth an official federal holiday.

Macy Gray Defends Her Stance on Redesigning U.S. Flag: It's Been 'Violated and Weaponized'