Issa Rae Savagely Shuts Down a Hater Calling Her 'Not Attractive'

The 'Insecure' co-creator and star claps back at the social media troll who judges her appearance, pointing out that they even 'look the same' and jokingly calling her a 'cousin.'

AceShowbiz - Issa Rae isn't here to eat up people's criticism of her look. Having been attacked by a random hater for an unknown reason, the Emmy-nominated actress swiftly shut down the person who dubbed her unattractive on Twitter.

"Issa Rae is not an attractive woman to me and that is okay," the hater shared her two cents on the "Insecure" co-creator and co-writer's appearance on Friday, May 21. Not showing love for all black women in general, she added, "Every black person aint attractive."

Believing that she wouldn't get noticed by Issa despite her judging tweet, the said troll claimed, "Also, she will never know who I am and even if she did it doesn't matter because I don't want to f**k her or be hired by her."

But that couldn't be far from the truth. Issa caught wind of it and quickly gave her response to the criticism. "Not my cousins publicly disrespecting me," she first tweeted back, likely knowing that the hater is also a black woman. The 36-year-old star then pointed out that they even "look the same," adding in another tweet, "Okay, but we look the same? The f**k?"

The Emmy-nominated actress clapped back at the troll.

Issa was also defended by her fans. Disagreeing with the hater's comment, comedian Chris Redd wrote, "Hold up, what did shorty say about fine a** Issa?" Another blasted the critic, "Auntie p***y? So nobody wants to keep you around. Damn, is that why you hating on @IssaRae ?" 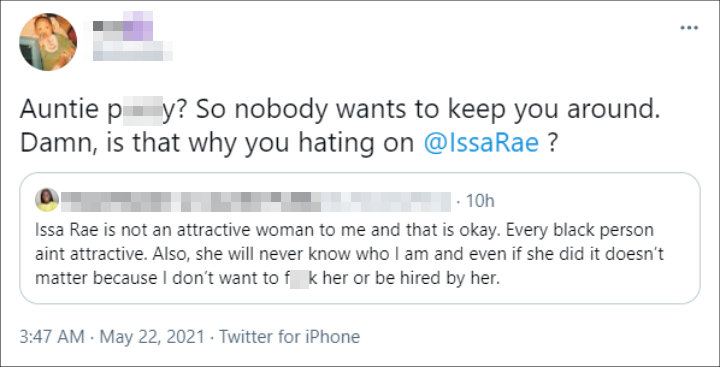 Someone else tried to prove that Issa and the hater have similar physical features by faceswapping their pictures. The Twitter user claimed that both women are "beautiful on the outside," but "not sure we can say the same for her [the troll] on the inside." Another echoed the sentiment as saying, "Y'all look tf alike really. She just glowed up on ya a**."

Issa Rae Teams Up With Converse for New Collection of Sneakers