The 'Keeping Up with the Kardashians' star sets the records straight about the swirling speculations by chiding on social media, 'You guys really just make up anything.'

AceShowbiz - Kylie Jenner has broken her silence about the rumors of her being in an open relationship with Travis Scott (II). In an attempt to shut down swirling speculations, the "Keeping Up with the Kardashians" star took to her social media account to call such reports about her private life "careless and disrespectful."

Making use of Twitter on Friday, May 21, the CEO of Kylie Cosmetics shared a series of posts to deny the rumors. In one tweet, she first pointed out, "I'm not discrediting anyone who is in an open relationship." She went on to state, "But it's just careless and disrespectful to throw this narrative out there without knowing what's true."

In a separate tweet, Kylie posted a screenshot of a Daily Mail's headline that read, "Kylie Jenner and rapper beau Travis Scott 'rekindled their romance (but are now in an OPEN relationship!).' " Slamming the report, she chided, "You guys really just make up anything." She also replied to another follower who mentioned TMZ did the same reporting. "I just saw this but yes tmz too lol," she wrote back.

Kylie has been in an on-off relationship with Travis since 2017. She shares her 3-year-old daughter Stormi Webster with the "Sicko Mode" rapper. Proving that they maintained a healthy co-parenting relationship, the 23-year-old reality star and the rapper took their daughter to Disneyland on Tuesday, May 18 along with her nieces, Dream and Chicago, as well as her sister Kim Kardashian.

The makeup mogul took used her Instagram Story to offer a glimpse at the fun outing. In one photo, she could be seen walking behind the children along with Kim and Travis. Over it, she wrote, "Hands full today." In a separate snap, she posed with Stormi while sitting in a teacup ride at the theme park. Travis also shared a photo of him walking hand-in-hand with his little girl on his Instagram account. 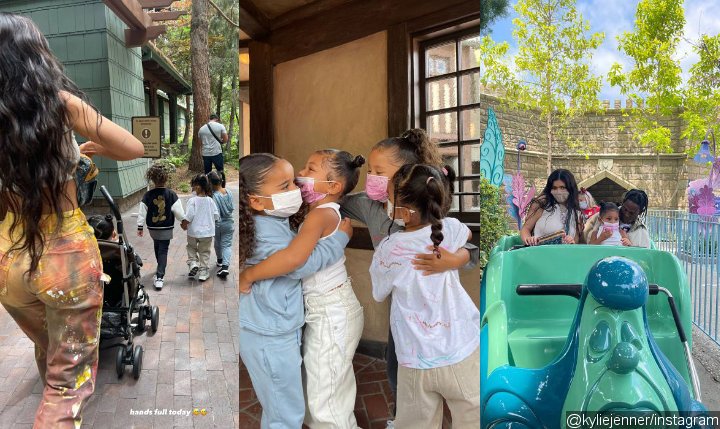 In early May, a source told Hollywood Life about Kylie and Travis' co-parenting relationship. "This past year more than ever Kylie was able to focus on being the best mom she can be and co-parent with Travis to the best of their abilities," the source stated. "They really were able to bond as parents and give the best for Stormi because he wasn't busy touring, and she wasn't at events all the time."

"And Kylie still has so much respect and love for Travis and makes sure to show that to him day in and day out. What's important is that she wants to have an incredible friendship with Travis and if a relationship is rekindled, that would be amazing," the insider added, before claiming that "they are not forcing anything to happen either way" since they have "no bad feelings about each other one bit."

Issa Rae Savagely Shuts Down a Hater Calling Her 'Not Attractive'