An Internet user, meanwhile, believes that the controversial brothers don't stand a chance to win the potential fight against the 'Hate It or Love It' rapper, calling the fight a 'death match.'

AceShowbiz - Logan Paul and Jake Paul have responded to The Game's callout for a fight. Ahead of Logan's match against Floyd Mayweather, Jr., the controversial brothers appeared to laugh off the challenge by the "Hate It or Love It" rapper.

It didn't take long before the brothers caught wind of the callout and responded. Feeling unbothered, Logan tweeted to The Game, "you gonna need your entire family." His brother Jake also echoed the sentiment as he wrote, "Hate it or love it you would get knocked the f**ked out." 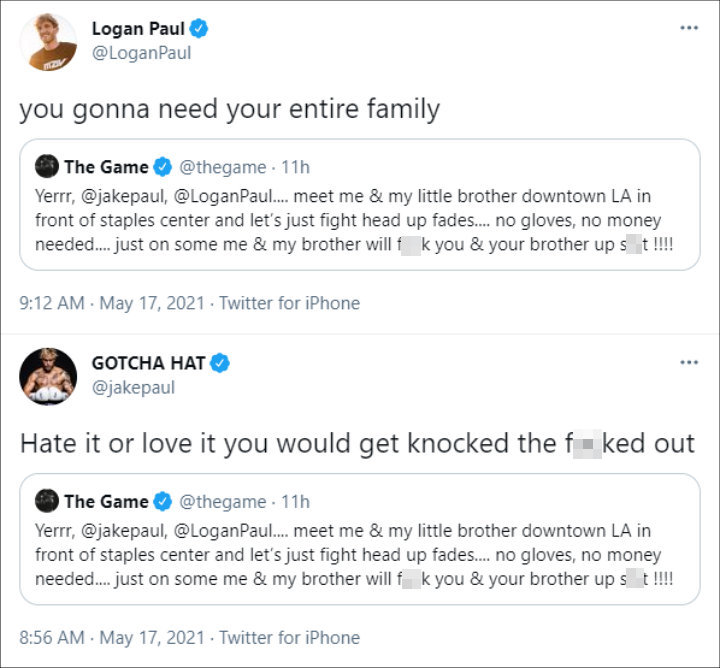 While Jake and Logan came out feeling confident and brave, some people warned them to be careful. "Careful Jake yk how 'thugs' be now a days they want a 'fair fade' but once they on the ground either u getting jump or shot up," someone told Jake.

Another user believed that Jake and Logan didn't even stand a chance to win the potential fight against The Game. "Guy's beefing with The Game?! F**king lost his mind. His head boutta be torn from his body. Before the fight," said the person. "that's a death match , don't do it logan and jake," another user commented.

That aside, Logan will fight against Floyd at Hard Rock Stadium in Miami on June 6. Announcing the match, the five-time world champion shared a promo video on Instagram and captioned it, "JUNE 6, 2021!!!! #MIAMI. Me and Logan Paul will be fighting at the Hard Rock Stadium. @mayweatherpromotions @fanmio and @showtimeboxing have come together to bring an epic Event!!!"

Jake also announced the forthcoming fight. "June 6 I break the simulation @mayweatherpromotions @fanmio and @showtimeboxing have come together to make boxing history!!! PPV on sale NOW @Fanmio LINK IN BIO," he penned on his Instagram page.

Nicki Minaj on Musical Hiatus: It's Good for Me and My Mental Health

Logan Paul Shares Video of Him Getting Bullied by Baboons

Logan Paul Seen Slapping a Guy Who Calls Him 'P***y'