After Dayanna Rodas begged him to come back in a viral TikTok video, the 'Grown Ups' actor finally meets with her during the restaurant's Milkshakes Monday event in Long Island, New York.

AceShowbiz - Adam Sandler has made a sweet return to IHOP. After being accidentally turned away in late April by Dayanna Rodas when he visited the breakfast restaurant chain with his daughter, the "Grown Ups" actor fulfilled the waitress' social media request for him to come back.

On Monday, May 10, Dayanna shared a TikTok video that compiled pictures of her with Adam at an IHOP event in Long Island, New York. The event, dubbed Milkshakes Monday, was actually a tribute to the 54-year-old actor as a result of her viral video. In the caption of the slideshow, the waitress wrote, "Couldn't have been more excited!!! Thank you Adam Sandler."

Couldn’t have been more excited!! Thank you Adam Sandler! #fyp#ihop#milkshakemonday#adamsandler#awesome#viral

In the clip which has American Authors' "Best Day of My Life playing in the background, both Dayanna and Adam wore "IHOP" masks. Adam himself has also shared his participation at the event via his social media account. Making use of Instagram, he shared a photo of his dog and simply wrote, "Thank u IHOP for Milkshakes Monday."

Adam made the epic return after poking fun at Dayanna's viral video days earlier. Making it clear he had no hard feeling over the incident, the "Uncut Gems" actor shared a tweet on May 3 that read, "For the record, I only left the IHOP because the nice woman told me the all-you-can-eat deal didn't apply to the milkshakes."

It turned out that IHOP took the "50 First Dates" actor's lighthearted tweet pretty seriously. In a response to the actor's tweet, the company wrote, "You know what, @AdamSandler, you may be onto something here. In your honor, we'd like to declare May 10th, 2021 #MilkshakeMonday at IHOP. More sweet details to follow." 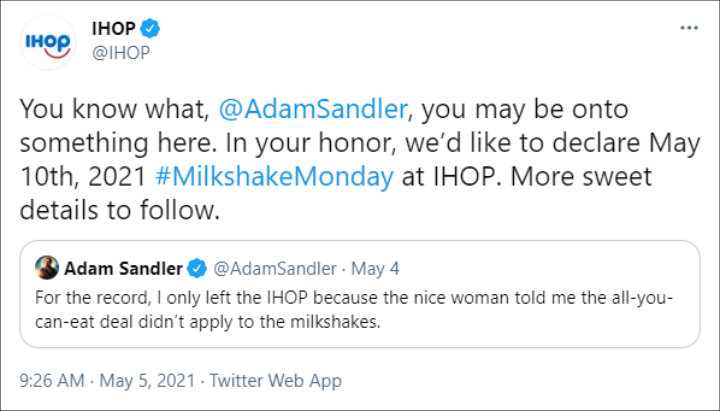 Days later, the restaurant tweeted the announcement that on May 10, they would have a charity promotion where they offered all-you-can-drink milkshakes. They also declared that a portion of the sales will be donated to the nonprofit organization Comedy Gives Back. 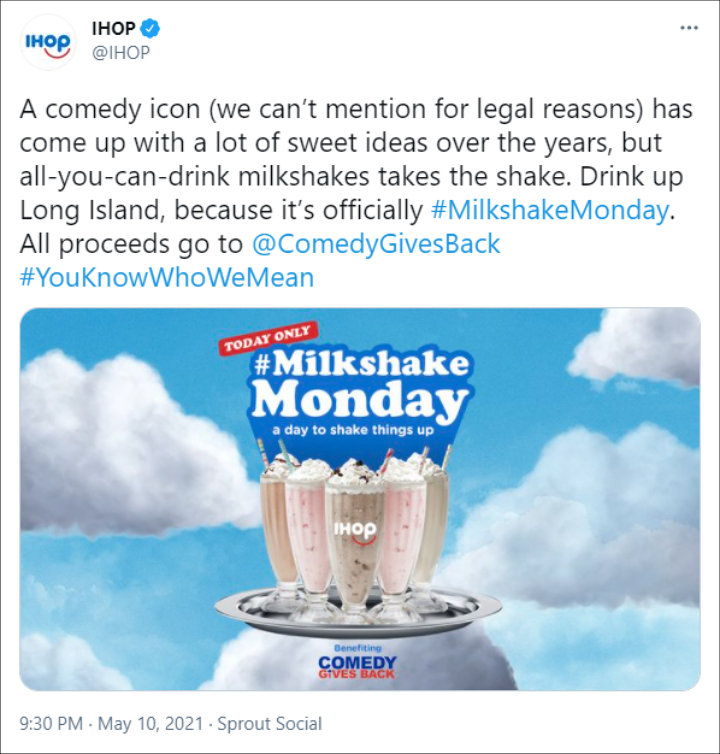 IHOP announced, "A comedy icon (we can't mention for legal reasons) has come up with a lot of sweet ideas over the years, but all-you-can-drink milkshakes takes the shake. Drink up Long Island, because it's officially #MilkshakeMonday." The restaurant added, "All proceeds go to @ComedyGivesBack #YouKnowWhoWeMean."

Dayanna became viral on TikTok after sharing a security camera footage that captured the moment she told Adam he had to wait 30 minutes to be seated. In her clip, the actor could be seen politely leaving the restaurant. In the caption of the post itself, the waitress begged the star, "Pleaseee come back."