Days after she offered a picture of the 'Party Hard' hitmaker planting a kiss on her head, the 'WandaVision' actress puts out a photo of them locking lips while embracing each other.

AceShowbiz - Actress Kat Dennings has sealed her romance with singer Andrew W.K. with a kiss on Instagram.

The "WandaVision" star has recently hinted at the new relationship by sharing shots of the "Party Hard" hitmaker online, including one in which he is featured planting a kiss on her head as she pouted for the camera.

However, she has since made it clear they are a couple after uploading an image of the pair embracing and locking lips, which she captioned with a love letter emoji. The musician, real name Andrew Fetterly Wilkes-Krier, responded to the post with a string of black heart emojis.

Dennings reposted the picture on Twitter on Sunday, May 9, and wrote, "Happy Birthday @AndrewWK." 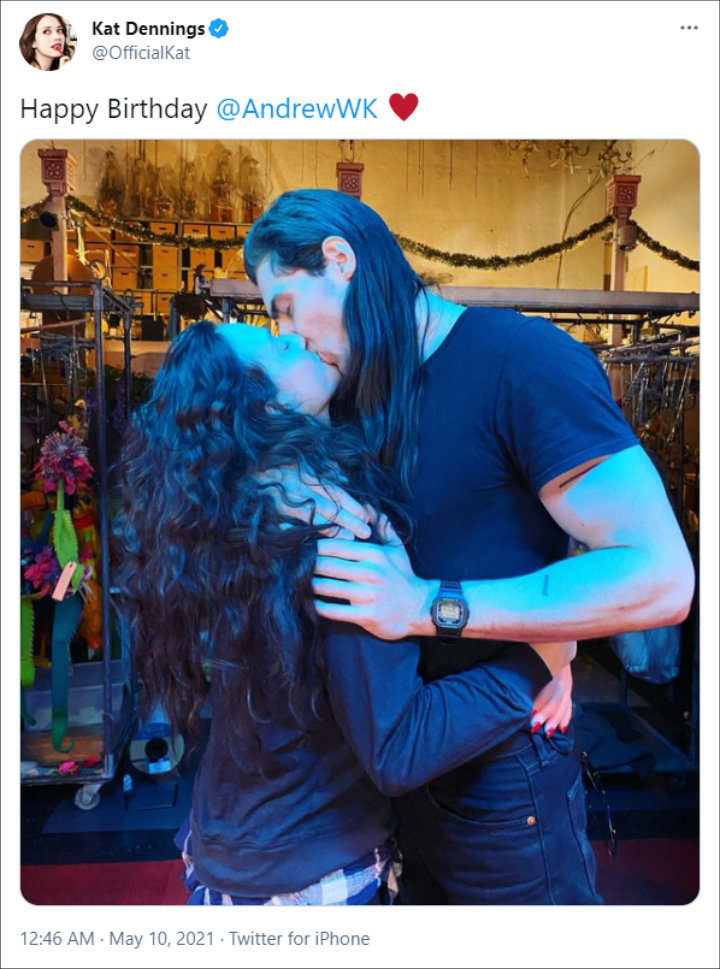 The news suggests the singer is no longer in a relationship with Cherie Lily, whom he wed in 2008, although he has yet to comment on the status of his marriage.

He isn't the first singer to romance Dennings - she previously dated Josh Groban, before they split in 2016 after two years together.

Back in 2019, Kat admitted to "have lost [herself] in a relationship, more than once." She explained to InStyle, "That has been my pattern, to fall for someone and then I am just gone from the world. One of my best guy friends actually says, that I fall off the world. Which is true! It's something that I didn't even realize I was doing. Men and women do it. It's just a natural thing to do when you fall in love."

Still, the 34-year-old actress acknowledged that friendship will last longer than romance. "Friendship is so important; feeling like you can make mistakes, and that person will still be there for you, that's incredible. It can be so much stronger than those romantic relationships," she stated. "Friends really can be forever - sometimes romantic relationships just don't last, but friendships do."