A fan has set up a GoFundMe page for Tom Hanks' son after a Twitter user shares screenshots of her alleged conversation with the rapper who asks her for $200 to cover his 'bills.'

AceShowbiz - Chet Hanks is apparently in dire need of some cash. Amid his legal trouble with his ex-girlfriend, the son of Oscar-winning actor Tom Hanks has allegedly been caught begging for money from a woman via Instagram.

The 30-year-old's supposed financial crisis is revealed after a Twitter user that goes by @c0wgirlonline posted screenshots of Chet's alleged direct messages to her. In their conversation, the actor/rapper asked the girl to send her $200 to cover his "bills."

When the woman offered to send him $22 instead of $200, he pleaded again, "Show me some love. And I'll call you." The woman apparently shut down his request as she replied, "your dad is forrest gump," before ending their conversation with "love u tho king im in la if u ever want to do push ups on the beach." 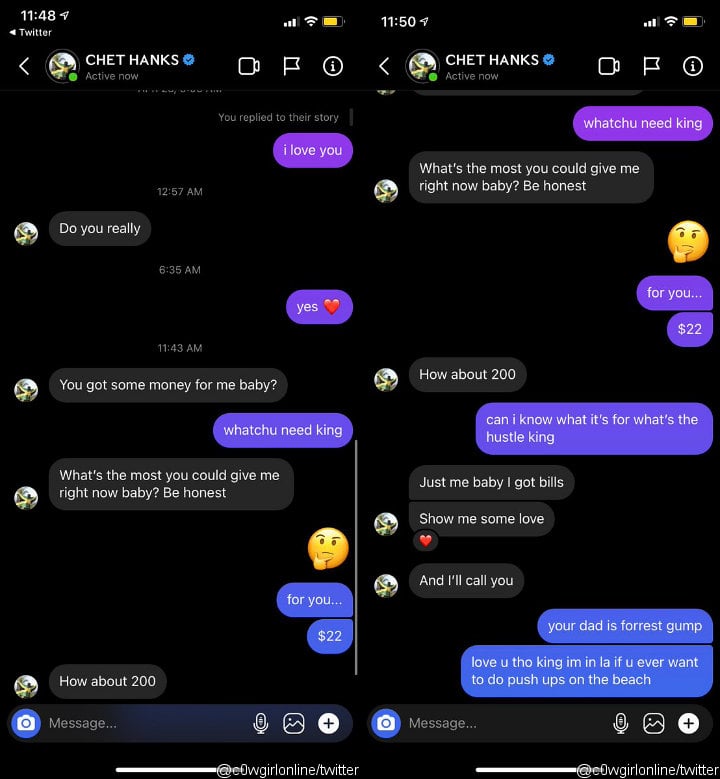 After the screenshots of the DMs went viral, a person who claims to be a friend of @c0wgirlonline launched a GoFundMe page for Chet, whose real name is Chester Marlon Hanks. "Chet Hanks has informed my friend Lily that he has 'bills to pay' and needs $200," read a statement on the page. "I am not sure why he needs this money as his father is a rich celebrity named Tom Hanks that you may know from movies such as Forrest Gump. I am sincerely hoping we can raise $200 for Chet Hanks so he can pay his bills."

Chet was recently slapped with a $1 million lawsuit by his former girlfriend Kiana Parker who accuses him of physically and verbally abusing her during their relationship. In a press conference on April 13, Kiana's attorneys claimed that the son of Tom Hanks and Rita Wilson had shown "an ever-escalating pattern of domestic abuse."

Chet previously claimed that Kiana attacked him when she reportedly flew into a rage as the star broke off their relationship and accused her of stealing money and property from him. He documented the incident in a video obtained by TMZ, in which Kiana is caught on camera swinging a pot at him as Chet appears to have taken a hit to the head. He also accused her of charging at him with a knife.

Chet has sued Kiana for assault and battery and theft, which Kiana has denied. She has obtained a temporary restraining order against the "Empire" star.

Tess Holliday Overwhelmed by Hate After Revealing Her Battle With Anorexia