Kiana Parker, who has previously obtained a restraining order against Chet Hanks, claims in her lawsuit that the 30-year-old actor/rapper showed 'an ever-escalating pattern of domestic abuse.'

AceShowbiz - Chet Hanks is facing a million-dollar lawsuit amid allegations of domestic violence. The actor/rapper's former girlfriend Kiana Parker is suing him for $1 million, claiming he physically and verbally abused her during their relationship.

The civil lawsuit was filed on Monday, April 12 in Fort Bend County. In a press conference held in Texas on Tuesday, Kiana's attorneys claimed that the 30-year-old son of Tom Hanks and Rita Wilson had shown "an ever-escalating pattern of domestic abuse."

"This is about violence within the confines of a relationship between a man and a woman, a man who mentally and physically and psychologically battered, Kiana Parker," said one of her lawyers, Kevin Murray.

The suit details several alleged incidents of abuse, including an incident last October when she visited Hanks in New Orleans while he was filming for Showtime's series "Your Honor". Kiana claimed Chet became enraged when she wanted to leave their hotel room.

Kiara stated Chet "became aggressive and hostile" and "grabbed her with great force, by her right arm causing instant pain" when she tried to leave. "Defendant Hanks refused to release the grip, and as Parker sought to get out of the violent situation, Defendant Hanks pushed her with such force that Parker knocked over tables in the room," the court docs continue to allege.

Chet allegedly pushed her, called her a "ghetto black b***h" and smashed her phone into pieces. The lawsuit goes on claiming that Chet warned her not to report the incident, reminding her he was "Chet Hanks and she wasn't s**t, no one would believe her, she was just a ghetto black b***h."

In another incident taking place in Sugar Land back in November 2020, Chet allegedly "threatened to 'blow [Kiana's] brains out' in a murder-suicide" with her 9-year-old twin children being present in the house.

The former lovers split on January 6, but when Kiana went to move her stuff out of the Sugar Land house, Chet allegedly "became extremely aggressive." The incident led her to contact authorities and file charges against him.

Kiana's lawyers Kevin and D'Angelo Lowe said in a joint statement, "Chet Hanks has repeatedly been seen abusing our client and needs to be held accountable for his actions, regardless of his family and their name recognition."

Meanwhile, Chet previously claimed that Kiana attacked him when she reportedly flew into a rage as the star broke off their relationship and accused her of stealing money and property from him. He documented the incident in a video obtained by TMZ, in which Kiana is caught on camera swinging a pot at him as Chet appears to have taken a hit to the head. He also accused her of charging at him with a knife.

Chet has sued Kiana for assault and battery and theft, which Kiana has denied. She has obtained a temporary restraining order against the "Empire" star.

Christian Siriano to Legalize Separation from Husband by Filing for Divorce 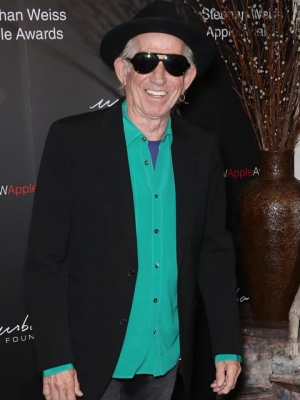