Blueface Likened to Imprisoned R. Kelly for Having Women Sleep in Bunk Beds and Get Tattoos

In a video circulating on social media, the 'Respect My Cryppin' rapper can be seen walking through a home with several young women in bunk beds, asking if they will be getting their tattoos today.

AceShowbiz - Blueface has raised eyebrows with his recent strange post. After a video of him having women sleep in bunk beds and get tattoos for him surfaced online, the "Respect My Cryppin" spitter found himself being likened to the imprisoned R. Kelly.

In the video which circulated on Twitter, the 24-year-old MC could be seen walking through a home with several women in bunk beds. He also asked them about their preparation for getting a tattoo of his logo, which is a blue Benjamin Franklin face. In the clip, he could be heard asking one woman who was still in bed, "You ready to get your tattoo today? get tattoos or go home."

Blueface's footage has led him to be compared to Kelly, who was accused of housing several women in his Georgia home and subjecting them to sexual, physical and emotional abuse. One user tweeted, "All jokes aside this whole Blueface situation is wild though frfr, I'm getting R. Kelly vibes from that video." Another echoed, "Blueface give me R Kelly vibes."

A third, meanwhile, added, "Now when blueface is the next R. Kelly I don't wanna hear nobody saying they didn't know he was a predator cause the n***a is showing off for y'all atp." Someone else, on the other hand, accused him of starting a cult by noting, "Blueface asked those women to get a tattoo of him or leave his home and also has bunkbeds for them to sleep on.... That's literally a cult.." 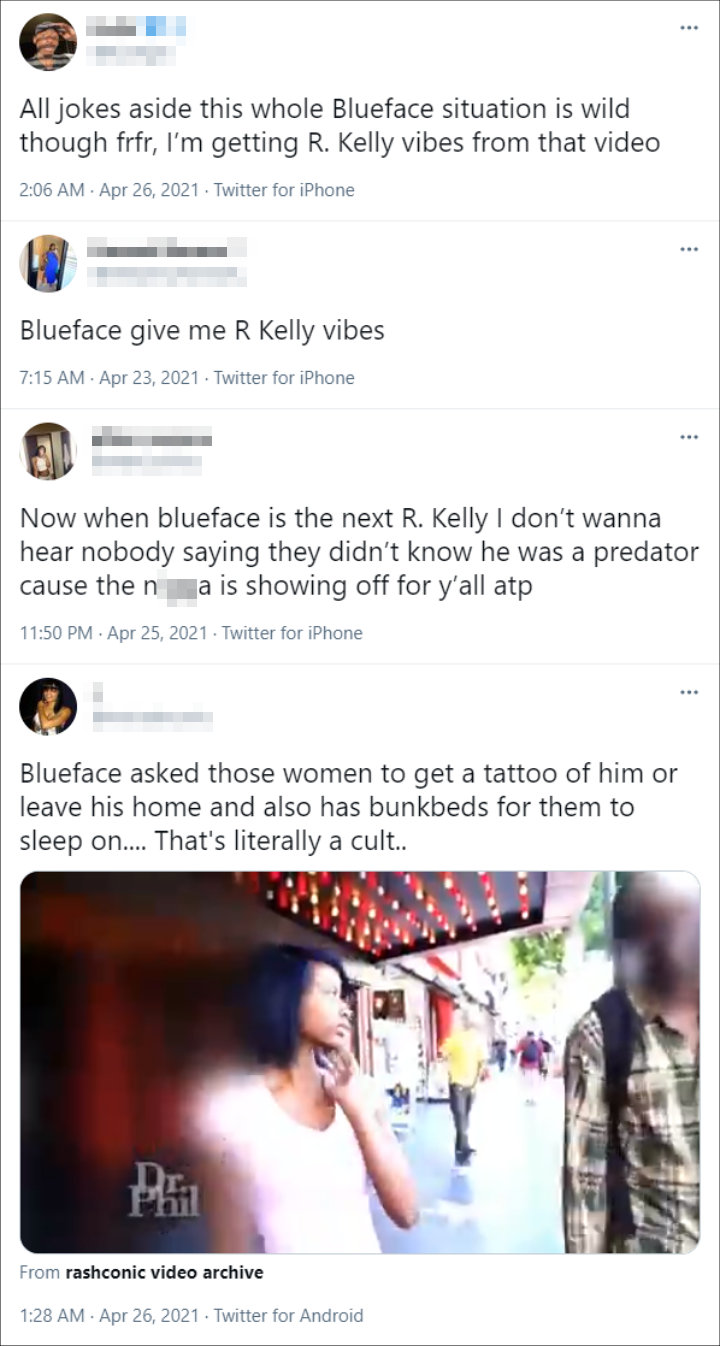 Blueface was likened to R. Kelly after a video of him having women sleep in bunk beds and get tattoos went viral.

Blueface has yet to offer clarification about the viral video. However, many believed that the women shown in the clip were taking part on his reality show "Blue Girl Club", which is released on OnlyFans. The "Thotiana" hitmaker himself previously opened up about the series back in October 2020.

"I don't have relations with any of these women. The purpose of the show is to develop these women by exercising there temper attitude patience an composure," the rapper wrote on Instagram Story. "An I'm letting then use my platform as a second chance to chase there dreams without selling themselves to get by. We are all 1 family. They all have a past I just wanna change their future."