The 'Montero (Call me By Your Name)' rapper decides to address speculations that he uses his sexual orientation for money in a tweet, challenging people to 'name 5 successful gay male artists in the last 10 years.'

AceShowbiz - Lil Nas X has had enough with accusations that he uses his sexual orientation for money. The "Montero (Call me By Your Name)" rapper decided to address the speculations that he's being "gay for success" in a tweet on Tuesday, April 20. 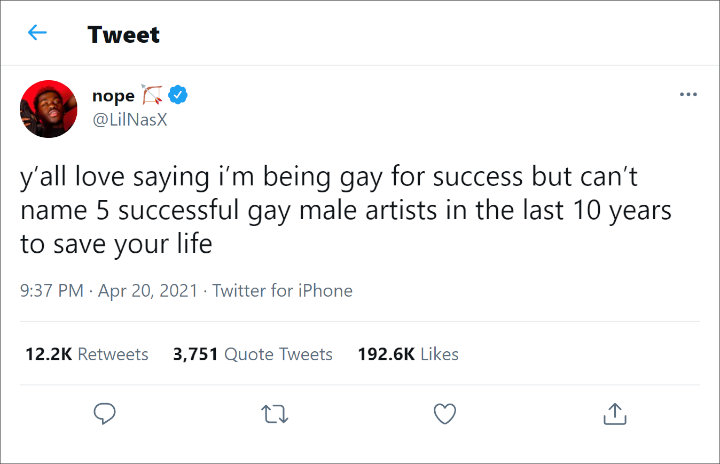 Lil Nas X reacted to speculations that he used his sexual orientation for money.

"1. Elton John 2. Olly Alexander 3. Sam Smith 3. Ricky Martin 4. Frank Ocean 5. Will Young," one person tweeted to Lil Nas X. "Elton John, Rob Halford (Judas Priest), Adam Lambert, Freddy Mercury, and of course, YOU! Don't listen to haters l, you are killing it. I accept you for who you are as a person. I will forever support you," a fan chimed in.

"I get the intent of your tweet, which it seems many here did not. I can name Adam Lambert but I am sure he would be bigger if he was not out & proud from day one. I know, for a fact, it cost him radio play. But also, things have changed in the last 10 years too," another person said.

That aside, Lil Nas X recently opened up about his relationship with his drug-addicted mom after he was accused of abandoning her. Earlier this month, the "Old Town Road" hitmaker took to Twitter to respond to the backlash over a video of his mother begging for money on the street.

"I hate speaking on my personal life," the 22-year-old star wrote in a tweet. He added, "but y'all n***as don't know how many nights I've cried myself to sleep feeling guilty because nothing i tried would help my mom."

The rapper, whose real name is Montero Lamar Hill, went on concluding his post with a message to his critics, "paint me as the bad guy all you want, but at the end of the day, you don't know me outside of this internet s**t."