The 20-year-old singing hopeful, who made it to the top 16 on the singing competition show, touches on why he had to leave via a social media post, thanking fans for their outpouring 'support.'

AceShowbiz - Wyatt Pike has broken his silence on his abrupt exit from "American Idol". Just two days after his departure was announced by host Ryan Seacrest, the singer took to social media to inform his fans that he is happy "to be home."

Making use of Instagram Story on Wednesday, April 14, the 20-year-old shared a picture of a car covered with snow. Alongside the snap, he raved, "good to be home! also rather snowy... love you all! [blue heart emoji]." 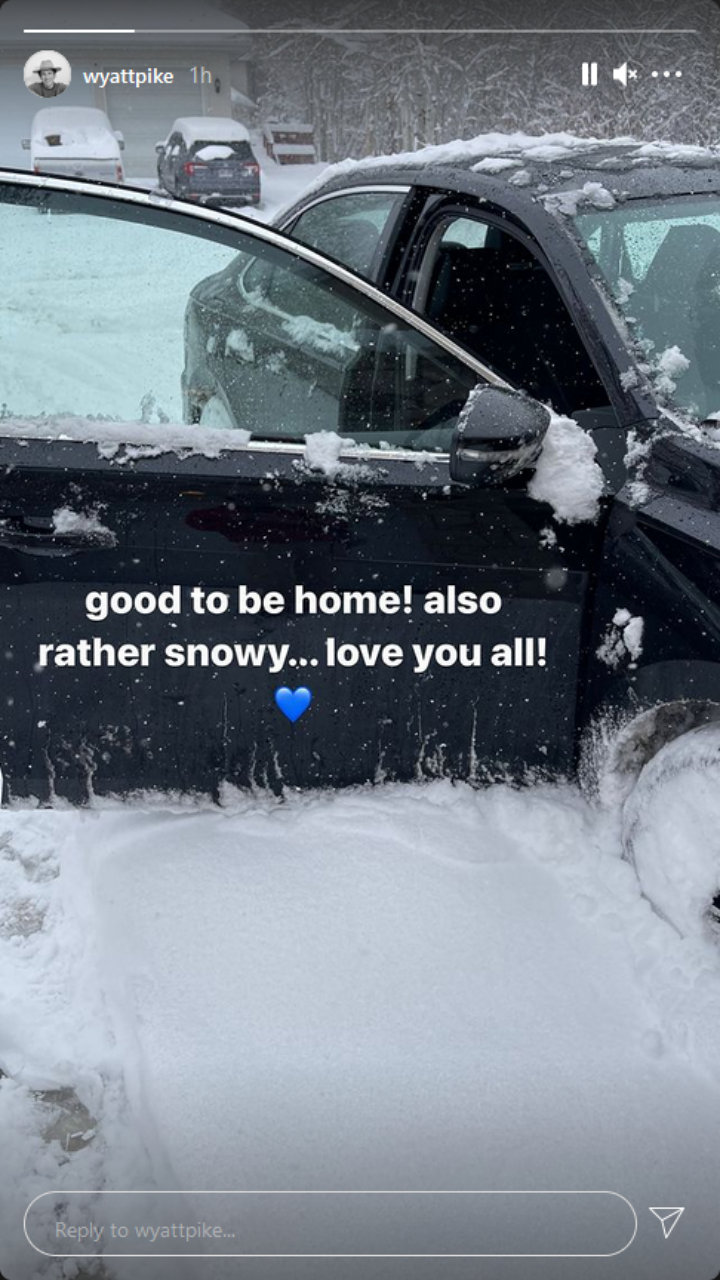 Wyatt Pike said he was happy 'to be home' following 'American Idol' exit.

A few hours earlier, Wyatt turned to his Instagram feed to reveal why he left the singing competition show. Putting out a picture of himself, he penned, "I had to leave the @AmericanIdol competition for personal reasons but am so thankful I get to play music for the rest of my life. Fellow contestants - miss you all, good luck!"

The Utah native went on to express his gratitude to those who have supported him on his journey. He stated, "Thank you to everyone for your support… do stick around for more musical things soon!"

Many of Wyatt's followers were saddened by his decision. However, some others left supportive comments for him. One fan assured, "You are going to do big things!! I'll always be rooting for you." Another added, "Can't wait to see what comes next Wyatt." A third chimed in, "so happy that you're okay. so excited for the future!!!! :)"

Wyatt, who had been competing on "American Idol" since late 2020, made it to the top 16. When viewers were waiting to see whether he was in the season's top 12, Ryan divulged in the Monday, April 12 episode, "Before we get to the results, I have to tell you that finalist Wyatt Pike will not be competing in the competition. He had to drop out, but we wish him the very best."

Wyatt sang a cover of "Use Somebody" by Kings of Leon in his last appearance, which gained praise from judges. One in particular was Katy Perry who gushed, "I think you do have a little bit of an angle in this competition that you're an authentic singer-songwriter... I think whatever happens, you're it."

Also complimenting Wyatt was Luke Bryan who said, "I remember one of the coolest things ever happened to me is the day I realized that I get to do music forever, under any circumstance." He continued, "I'm telling you, Wyatt, you are going to be able to do music for the rest of your life."

"You have a style on stage that we like to watch," Lionel Richie pointed out. "And to watch you take that song and make it your song, you're on your way to something big, my friend."

'American Idol' Finale Recap: [Spoiler] Is Crowned as the Winner of Season 19