The 'Real Housewives of Beverly Hills' alum has bragged online that Mason, her 17-year-old son with ex-husband Eddie Cibrian, has successfully gotten into college without having to fake anything.

AceShowbiz - Brandi Glanville has made it clear that her eldest child is not going to University of Southern California. After appearing to troll Lori Loughlin over her college admission scandal with announcement that her son Mason has successfully gotten into USC without any shady efforts, "The Real Housewives of Beverly Hills" alum offered clarification on his acceptance.

On Tuesday, March 9, the 48-year-old reality star tweeted, "Was making a joke about the rowing team & bribes cuz my baby did it all on his own & I'm proud of him. Should have proofread my tweet though, he got accepted to a University **IN** Southern California." She added, "Will share the school at a later time. Sorry 4 the confusion #ProudMom." 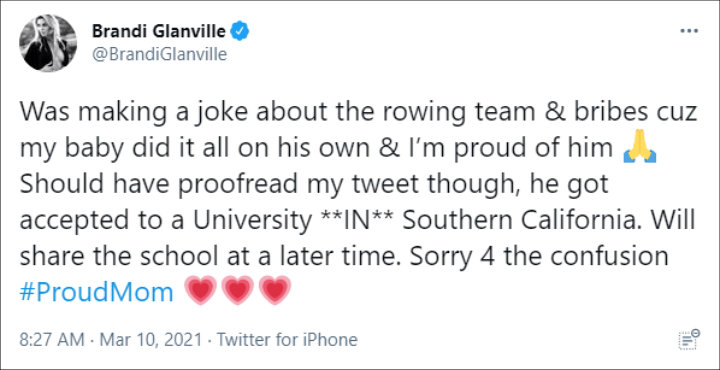 Brandi Glanville clarified that her son Mason is not going to University of Southern California.

Hours before sharing the clarification post, Brandi bragged on Twitter that her 17-year-old son with ex-husband Eddie Cibrian has been accepted into USC without having to fake anything. She declared, "Amazing news my baby got accepted to the University of Southern California and I didn't even have to fake any rowing pictures or bribe anyone."

Brandi Glanville bragged that her son Mason got accepted into University of Southern California.

The TV personality's tweet caught the attention of former "The Real Housewives of Orange County" star, Heather Dubrow. She quipped in the reply section, "Congrats !!! THAT IS AMAZING @BrandiGlanville ! Although you'd look good in orange."

Some of Brandi's followers, however, criticized her shade at Lori. One wrote, "You can't just be proud of your son for his accomplishment without jabbing other people..grow up. Congrats to your son for his hard work." Another chimed in, "This would have been so sweet just had to add something petty in." Someone else agreed, "you're right, it was a great moment for a proud mom but she had to ruin it by showing everyone she ain't no better than s**t."

Brandi's announcement a few months came after Lori was released from the Federal Correctional Institution in Dublin, California. The "Fuller House" alum and her husband Mossimo Giannulli had previously pleaded guilty to paying $500,000 to help their daughters Olivia Jade Giannulli and Isabella Rose Giannulli get into University of Southern California.

While Lori has completed her two-month jail time, her fashion designer husband is still serving his sentence behind the bars. His prison term at the Federal Correctional Institution, Lompoc will come to an end in April.

Brandi Glanville Says Jen Shah Should Be Given Longer Prison Sentence: 'It's Not Fair'