In the March 10 episode of the daytime talk show, the wife of Ozzy Osbourne fights back tears as she argues with Sheryl Underwood whether or not Piers' remarks about Meghan Markle were racist.

AceShowbiz - Sharon Osbourne got people calling for her firing over her passionate defense of Piers Morgan in the wake of his controversial comments about Meghan Markle. On Wednesday, March 10, the longtime host of "The Talk" engaged in a heated on-air debate with her co-hosts over whether or not her friend was racist. Her arguments apparently did not sit well with viewers.

A number of "The Talk" fans turned to Twitter to share their thoughts on Sharon's snapping at Sheryl Underwood. "Now if a black woman would have cursed and went into tantrum mode on live tv . She would be fired tonight ! Oprah & Gayle would never ! But go be great Sharon Osbourne," one tweeted. "Cause @TheTalkCBS just lost me as a viewer if her a** isn't fired after today baby!" 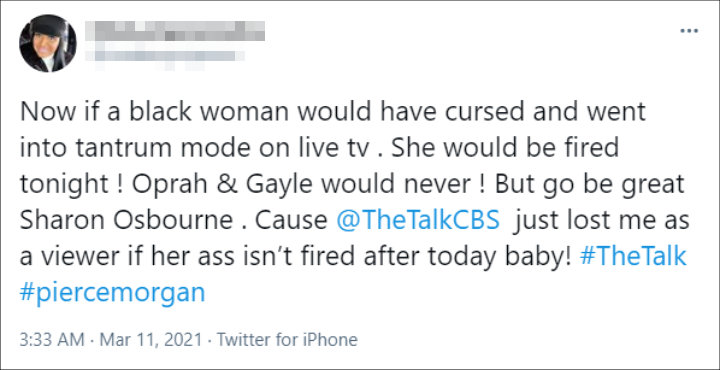 Sharon Osbourne slammed for defending Piers Morgan on 'The Talk'.

Another suggested that Sharon has just had a career-ending meltdown. "Sharon Osbourne is on TV ruining her career right now...what are you thinking? You have Black women SPOONFEEDING you answers, generously giving their own experiences, and your main concern is bickering over them," the user pointed out. "She said 'I feel like I'm about to be put in the electric chair.' " 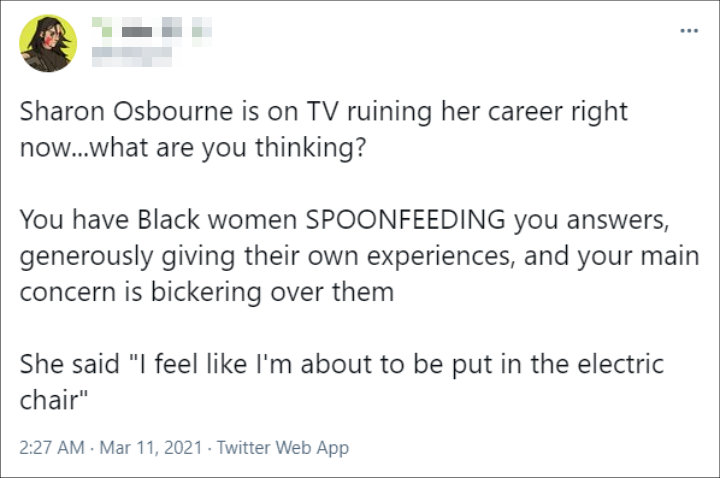 Sharon Osbourne said to have had a career-ending meltdown post-'The Talk' heated debate.

A third user went further by dubbing Sharon "Karen" for her on-air clash. "Big Karen energy ! While actually not listening to her black 'friend' about race. By the way it is NOT black people's responsibility to school you about racism & privilege so instead of being an a**hole while she is kind enough to do it 'LISTEN'," so tweeted the viewer.

Sharon Osbourne got called Karen by 'The Talk' viewer for on-air clash with co-hosts.
See also...

On Wednesday, Sharon sat down with Sheryl and their fellow co-hosts Amanda Kloots and Elaine Welteroth to address her earlier declaration that she stood by Piers after he drew backlash over his statement that he he "didn't believe a word [Meghan] says" in her explosive interview with Oprah Winfrey.

"I feel even like I'm about to be put in the electric chair because I have a friend who many people think is a racist," Sharon went on arguing. "So that makes me a racist. And for me at 68 years of age to have to turn around and say, 'I ain't racist. What's it got to do with me?' Okay. How can I be racist about anybody? How can I be racist about anybody or anything in my life? How can I?"

At one point, teary Sharon told Sheryl, "Don't try and cry because if anybody should be crying, it should be me." Calmly, her co-host replied, "It was not the exact words of racism, it's the implications and reaction to it. To not want to address that she is a Black woman and to try to dismiss it or to make it seem less than what it is, that's what makes it racist."

Sherly continued assuring Shannon that her co-hosts did not accuse her of being racist. "Right now, I'm talking to a woman who I believe is my friend and I don't want anybody here to watch this and say that we're attacking you for being racist," she pointed out. Still, Sharon retaliate and said, "It's too late. I think that seed's already sowed."

One day before the on--air debate, Sharon voiced her support for Piers after his abrupt exit from "Good Morning Britain". At the time, the wife of Ozzy Osbourne tweeted, "People forget that you're paid for your opinion and that you're just speaking your truth."

Sharon Osbourne Down With COVID-19 After Caring for Ozzy Osbourne