The Kara depicter on The CW's 'Supergirl' has taken to her Instagram account to extend her support to the British singer, who is suing her actor ex-boyfriend for sexual battery and assault.

AceShowbiz - Melissa Benoist has thrown her support for FKA twigs. After the latter detailed her sexual abuse claims against ex-boyfriend Shia LaBeouf in a revealing interview, the actress portraying titular character Kara Danvers on The CW's "Supergirl" publicly declared that she stands with the "Cellophane" hitmaker.

The 32-year-old actress voiced her support for the British singer, whose real name is Tahliah Debrett Barnett, through an Instagram Story post. Reposting the latter's picture, she assured, "i stand with you @fkatwigs [red heart emoji]." 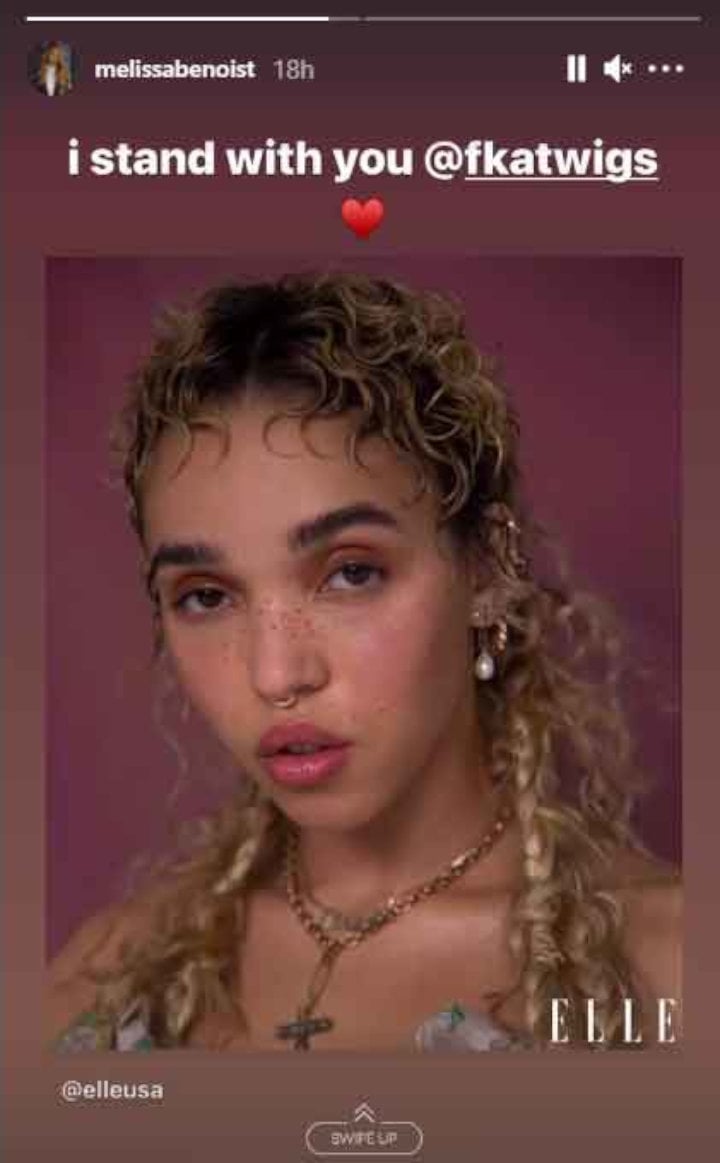 Benoist's post came shortly after twigs got candid about her abusive relationship with LaBeouf. "It's a miracle I came out alive," she told Elle magazine. "If you put a frog in a boiling pot of water, that frog is going to jump out straightaway. Whereas if you put a frog in cool water and heat it up slowly, that frog is going to boil to death. That was my experience being with LaBeouf."

twigs, who is suing the "Transformers" actor for sexual battery and assault, acknowledged that there was something wrong in their romance. However, whenever she wanted to leave, she claimed that her former beau made big efforts to win her back. "It was a bit too much. It felt uncomfortable," she stated. "I look back now, and it feels like really aggressive love."

"After I moved into his house, that's when the abuse really escalated," twigs further elaborated. "I realized then I wasn't just dealing with a tortured person who was going through a divorce. Or that outside factors in his life [were] making him act out on me. I was involved with an inherently abusive person."

Benoist herself has previously opened up about her being a survivor of domestic violence. In late November 2019, the wife of Chris Wood detailed how her former partner, whose identity she kept hidden at that time, got violent with her during the course of their relationship. She additionally claimed that one incident left her with an iris injury that permanently affected her vision.

Nearly one year after Benoist came forward about her past abusive relationship, her ex-husband Blake Jenner confessed to be the one responsible. In October 2020, he wrote on Instagram. "I take full responsibility and accountability for the hurt that I inflicted during my relationship with my past partner - emotionally, mentally and yes, physically."

Beyonce Provides Relief for Victims of Winter Storms in Texas