In a press conference after releasing the statement responding to the criticism, the Texas senator admits his decision to go to Mexico while his state is in crisis 'was obviously a mistake.'

AceShowbiz - Texas Senator Ted Cruz has released a statement following backlash for his trip to Cancun while the state is in the middle of crisis. Since last week, hundreds of thousands of Texans have experienced power outages following a serious winter storm.

Responding to the storm of criticism, the senator said in a statement issued on Thursday, February 18, "This has been an infuriating week for Texans. Like millions of Texans, our family lost heat and power too." Attributing his trip to Mexico to being "a good dad" to his two daughters, he explained, "With school cancelled for the week, our girls asked to take a trip with friends. Wanting to be a good dad, I flew down with them last night and am flying back this afternoon."

"My staff and I are in constant communication with state and local leaders to get to the bottom of what happened in Texas," the Republican politician claimed. "We want our power back, our water on, and our homes warm. My team and I will continue using all our resources to keep Texans informed and safe."

Cruz later held a press conference, where he was asked whether he agreed with people's opinion that the decision to go to Mexico was "tone deaf." With a slight chuckle, he admitted, "It was obviously a mistake" and that "in hindsight I wouldn't have done it."

Once again using his children as an excuse for the trip, the 50-year-old stated, "I started having second thoughts almost the moment I sat down on the plane, because on the one hand, all of us who are parents have a responsibility to take care of our kids, take care of our family. That's something Texans have been doing across the state."

"But I also have a responsibility that I take very seriously for the state of Texas and frankly, leaving when so many Texans were hurting didn't feel right and so I changed my return flight and flew back on the first available flight I could take," he continued.

Cruz went on addressing the protest outside his home. "Of course, I understand why people are upset. Listen, we're in a strange time where Twitter's been going crazy and the media is going crazy and there's a lot of venom and vitriol that I think is unfortunate frankly on both sides," he said. "I think everyone ought to treat each other with respect and decency and try to understand each other more particularly at a time of crisis."

Promising that he would return to Texas later in the afternoon, Cruz stated he has to wait for his COVID-19 test to come back negative, "I couldn't take a morning flight because the current restrictions require a Covid test, so I had to get a Covid test this morning, before I could get on a flight back, so I took the first flight I could get after getting the Covid test and testing negative."

Cruz was spotted departing from Bush Intercontinental Airport on Wednesday. After pictures of him and his family at the airport and on the plane surfaced online, people were enraged by his trip as Texans have been suffering through freezing temperatures without power or running water in the wake of the storm.

Texas state Rep. Gene Wu, a Democrat representing southwest Houston, was among those who ripped the senator, tweeting a photo of Cruz aboard a flight and writing Cruz was flying south "while the state was freezing to death and having to boil water."

Comedian Kathy Griffin was boiling with anger as she tweeted, "You guys. It's starting to look like Ted Cruz did fly to sunny Cancun TODAY. The fiery anger coursing through my veins right now could heat up all of Texas." 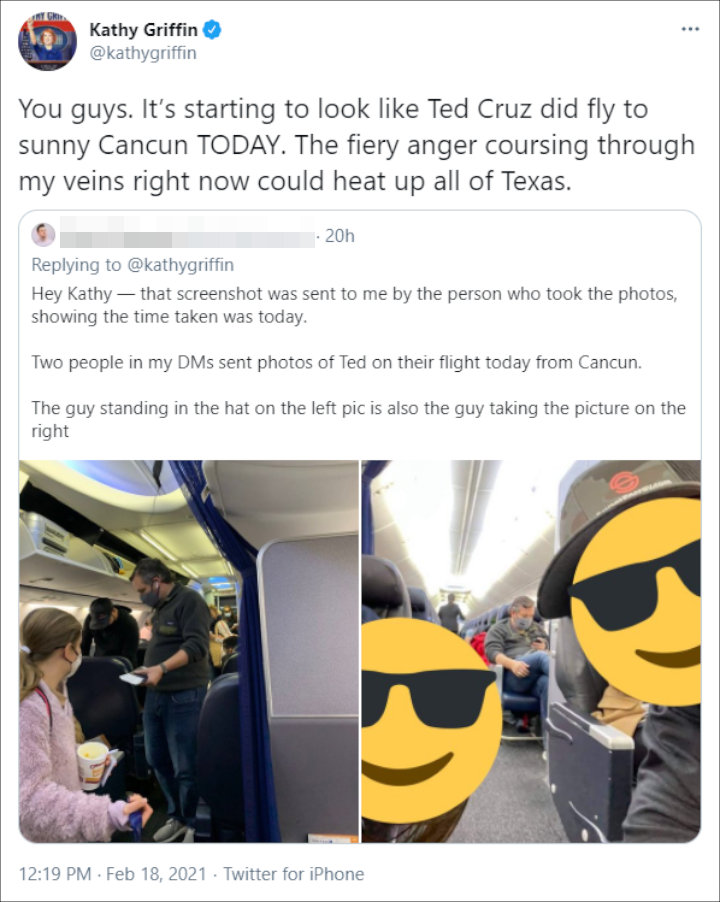 "While millions in Texas don't have working heat and water because of a crushing snow storm, Ted Cruz is flying off to Cancun for funsies. You just can't make this s**t up," activist and writer Charlotte Clymer wrote. "I'm just sitting here laughing. My rage shot way over anger to stunned laughter. Cruz hopped on a jet to Cancun while millions in his state are freezing?! That is just terrible screenwriting for a villain."

Clymer sarcastically added, "Look, out of fairness to Ted Cruz, traveling to Cancun while millions in your state are freezing and without water is somehow less worse than enabling an attack on the U.S. Capitol, so this is technically a month-to-month improvement." Another user asked in disbelief, "Did Ted Cruz really fly to Cancun today in the middle of one of the worst natural disasters and humanitarian crises in Texas's history?"

Texas Sen. Ted Cruz Booked His Return Ticket for Saturday Prior to Backlash Over Cancun Trip