After attempting to criticize the iconic 'Sesame Street' character's vaccination status, the Texas senator is called out by 'Family Guy' creator Seth MacFarlane, who says that the giant yellow bird is 'smarter' than the politician.

AceShowbiz - Ted Cruz has landed in hot water. The Texas senator attempted to criticize the iconic "Sesame Street" character Big Bird's vaccination by labeling the act "government propaganda," but it has since backfired.

Big Bird took to Twitter on Saturday to announce that he'd gotten the shot, which is now available for American children between the ages of 5 and 11. "I got the COVID-19 vaccine today!" Big Bird wrote on his official Twitter account.

"My wing is feeling a little sore, but it'll give my body an extra protective boost that keeps me and others healthy." Big Bird also mentioned that CNN host Erica Hill had told him that he had been getting vaccines since he was little and said he had no idea.

It didn't take long for Ted to respond to the tweet. "Government propaganda...for your 5 year old!" he wrote. In the meantime, President Joe Biden applauded Big Bird for his decision, writing, "Good on ya, @BigBird. Getting vaccinated is the best way to keep your whole neighborhood safe."

Shortly after Ted replied to the tweet, he was clowned and slammed by social media critics for calling out the giant yellow bird. One person who came after him was "Family Guy" creator Seth MacFarlane.

Ted then replied to Seth's comment as saying, "Well, every one of those is a puppet, most with a hand inserted up their backside." He added, "@SethMacFarlane is 1 of the funniest souls on the planet. Am sorry to see him shilling for petty authoritarians who would deny you the right to make your own medical choices. #YourBodyYourChoice." 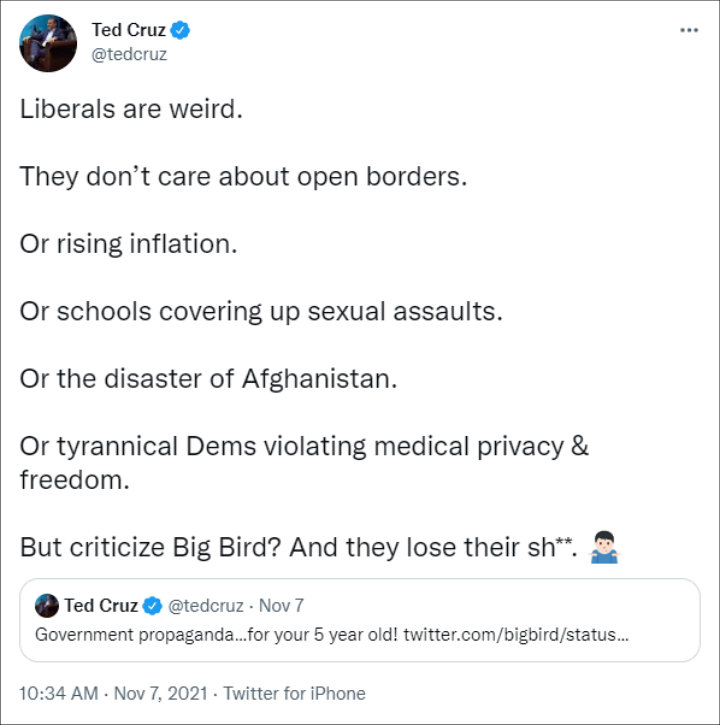 In a separate Twitter post, Ted stated, "Liberals are weird." The senator continued, "They don't care about open borders. ... Or rising inflation. ... Or schools covering up sexual assaults. ... Or the disaster of Afghanistan. ... Or tyrannical Dems violating medical privacy & freedom. ... But criticize Big Bird? And they lose their s**t."

'The Voice' Recap: Live Shows Kicks Off with a Bang

Texas Sen. Ted Cruz Booked His Return Ticket for Saturday Prior to Backlash Over Cancun Trip