On National Roast Day, the fast food chain responds to Lionsgate's request to roast the film studio by making reference to the 'Man from U.N.C.L.E.' star's leaked DM scandal.

AceShowbiz - Wendy's isn't only known for its burgers, but also for its sharp tongue. On National Roast Day, a made up tradition during which the fast food chain dished up a series of brutal insults to willing participants on Twitter, the company's Twitter account savagely roasted Armie Hammer in the wake of his leaked DM scandal.

Wendy's made a reference to the actor's alleged cannibalism fantasy when responding to Lionsgate's request to roast it. "ok i'll play… roast me," the film studio tweeted to the fast food chain as it marked the National Roast Day with a post which read, "Time for everybody's favorite made up social media holiday. It's #NationalRoastDay, like right now. Drop a 'Roast Me' below and feel the burn." 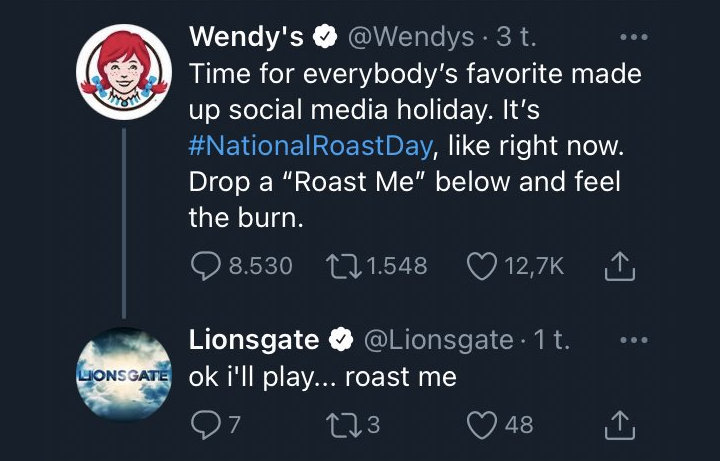 Lionsgate made a roast request to Wendy's.

In response to Lionsgate's request, Wendy's wrote back, "We'd give you a hand but one of your former actors might eat it. #NationalRoastDay." Hammer was initially tapped to star in the studio's upcoming film "Shotgun Wedding" opposite Jennifer Lopez, but he has since stepped down and been replaced by Josh Duhamel following the leaked DM scandal. 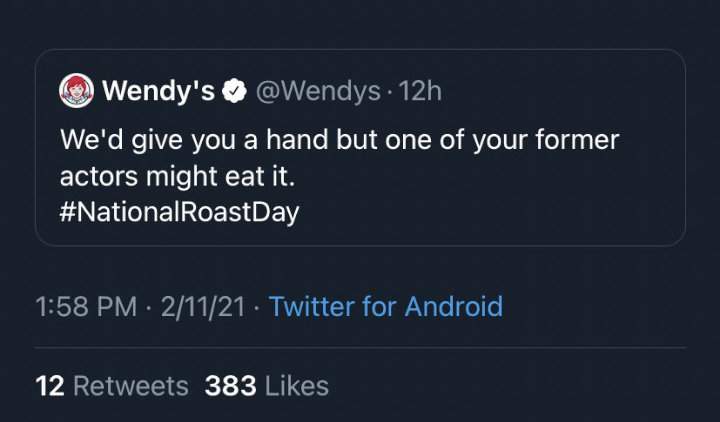 Wendy's later seemingly regretted the decision to make a joke about Hammer as it quickly deleted the risque tweet.

Lionsgate and Hammer were not the only ones that felt the burn by Wendy's on National Roast Day as it tweeted to Coca-Cola, "Can I get a cup for water? #NationalRoastDay." It was referencing to a frequent request made by freeloaders at fast-food purveyors.

Responding to a roast request from Oreo, Wendy's wrote, "New flavor idea: Don't." Wendy's also savagely mocked Velveeta with the joke, "How are you a verified account when you're not even verified cheese? #NationalRoastDay."

Hammer's career has been in a freefall after his explicit messages leaked online in January, exposing his cannibalism fantasy. Since then, multiple women, including his former girlfriends, came forward with abuse allegations against him.

His attorney denied the allegations, saying that the interactions were "completely consensual in that they were fully discussed, agreed upon, and mutually participatory." The 34-year-old actor also decried "the vicious and spurious online attacks" against him in a statement announcing his exit from "Shotgun Wedding".