During the socially distanced celebration, the 43-year-old quarterback is seen throwing the Lombardi Trophy across the river as he floats on the boat around the Hillsborough River in Tampa.

AceShowbiz - Tom Brady appears to have had a little too much fun during the Tampa Bay Buccaneers Super Bowl boat parade on Wednesday, February 10. The 43-year-old quarterback looked drunk after celebrating the Super Bowl LV victory with his teammates.

For the socially distanced celebration, the Bucs were partying while floating on boats around the Hillsborough River in Tampa. In some videos, Tom was seen holding the Lombardi Trophy and holding up seven fingers, referring to his record-breaking seven Super Bowl wins.

Upon landing, Tom seemed to be barely able to walk on himself. He was being help upright by somebody else, who escorted him through awaiting paparazzi, while he continued flashing a smile and looked delirious.

Twitter users quickly took to the social media app to comment on Tom's seemingly drunk appearance, posting jokes and memes that made "Drunk Tom Brady" trending on Wednesday. "I guess his sea legs aren't what they used to be...," one person quipped.

The former New England Patriots star, however, was alert enough to check on the latest updates on Twitter after partying with his teammates. Noticing the headlines he made with a video of himself looking drunk after the celebration, he posted on Twitter, "Noting to see her...just litTle avoCado tequila." 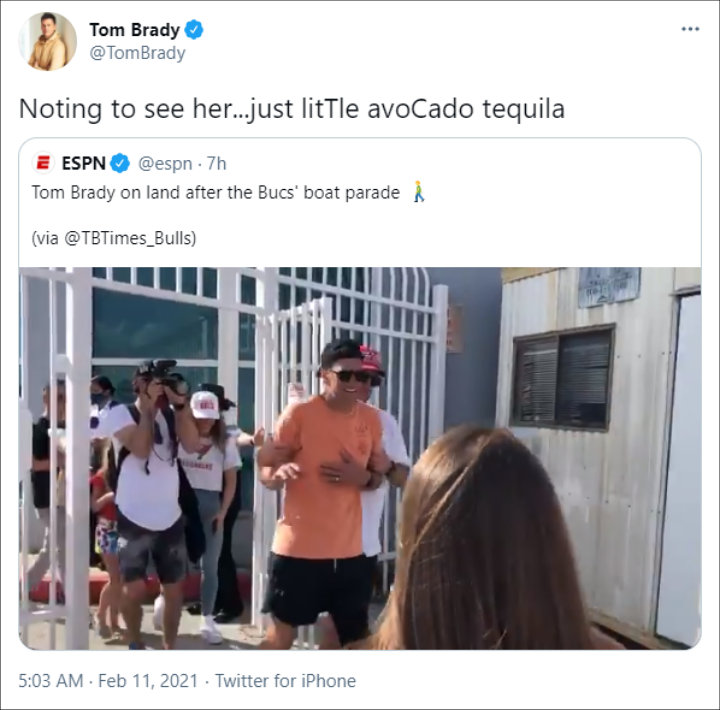 During the Super Bowl parade, Tom also made people's hearts skip a beat when he casually threw the Lombardi Trophy across the river. Showing off his impressive pass which helped the team win Super Bowl LV, he tossed the trophy from his boat to another where Rob Gronkowski was. Fortunately, someone was there to snatch the trophy and keep it safe.

The Buccaneers defeated the Kansas City Chiefs 31 to 9 during the big game at Raymond James Stadium on Sunday, February 7. It marked the Buccaneers' second win after they last won Super Bowl in 2003 and Tom's first with the team. He previously scored six Super Bowl wins with the Patriots, for which he played for 19 years before leaving the team in 2019.