The 'Justice League' actor expresses his appreciation to the former 'Buffy the Vampire Slayer' star for backing his allegations about the director's bad behavior with her own revelations.

AceShowbiz - "Justice League" star Ray Fisher has reached out to actress Charisma Carpenter after she went public with abuse claims against Joss Whedon to support his allegations about the director's bad behavior.

Fisher came forward with his allegations of poor treatment on the "Justice League" set, revealing Whedon was "abusive" towards him and "unprofessional", prompting an investigation by Warner Bros officials, and on Wednesday, February 10, Carpenter took aim at her former TV boss, revealing she's still traumatized by his actions.

Charisma claimed Whedon called her "fat" in front of colleagues, poked fun at her religious beliefs, and accused her of sabotaging his show.

In a lengthy tweet, she wrote, "He was mean and biting, disparaging about others openly, and often played favorites, pitting people against one another to compete and vie for his attention and approval. He called me in for a sit-down meeting to interrogate and berate me regarding a rosary tattoo I got to help me feel more spiritually grounded in an increasingly volatile work climate that affected me physically... and then unceremoniously fired me the following season once I gave birth."

She also revealed she was part of WarnerMedia's internal "Justice League" investigation.

Fisher has responded to the actress' social media statement on Twitter, calling on fans to protect Carpenter at all costs.

"I am forever grateful for her courage and for her lending her voice to the Justice League investigation," Ray wrote. "Read her truth. Share her truth. Protect her at all costs."

He added the hashtag #IStandWithCharisma, which started trending on Twitter hours earlier. 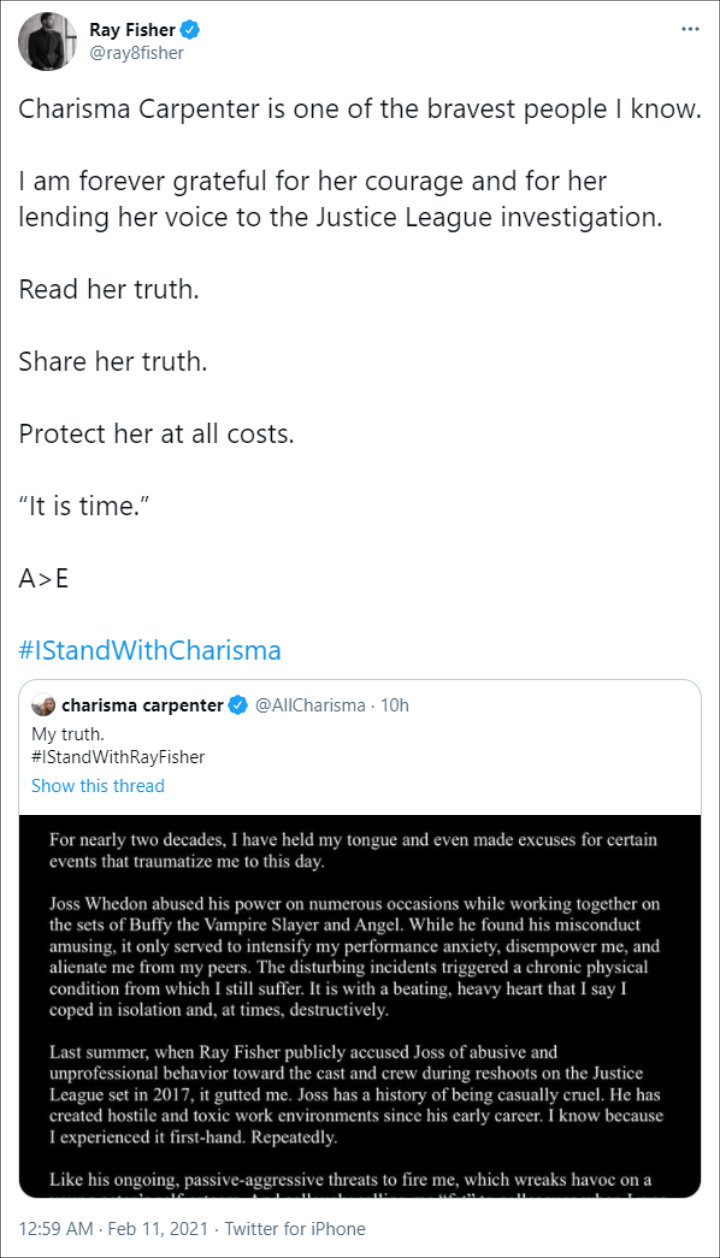 "Joss has a history of being casually cruel. He has created hostile and toxic work environments since his early career. I know because I experienced it first-hand. Repeatedly," she wrote.

Her co-stars, Sarah Michelle Gellar and Michelle Trachtenberg, have subsequently taken to social media to support her.

'Married at First Sight': Chris Shows Remorse After Telling Paige That His Ex-Fiancee Is Pregnant