The tension between Fisher and Warner Bros. started after Fisher, who plays Cyborg in DC superhero movies, alleged unprofessional conduct on the set of 'Justice League' back in July.

"His lies, and WB PR's failed Sept 4th hit-piece, sought to undermine the very real issues of the Justice League investigation," Fisher wrote on the blue bird alongside a link to Hamada's Sunday interview with the New York Times. Later, he vowed that he "will not participate in any production associated with him," before adding, "A>E," which refers to "Accountability>Entertainment." 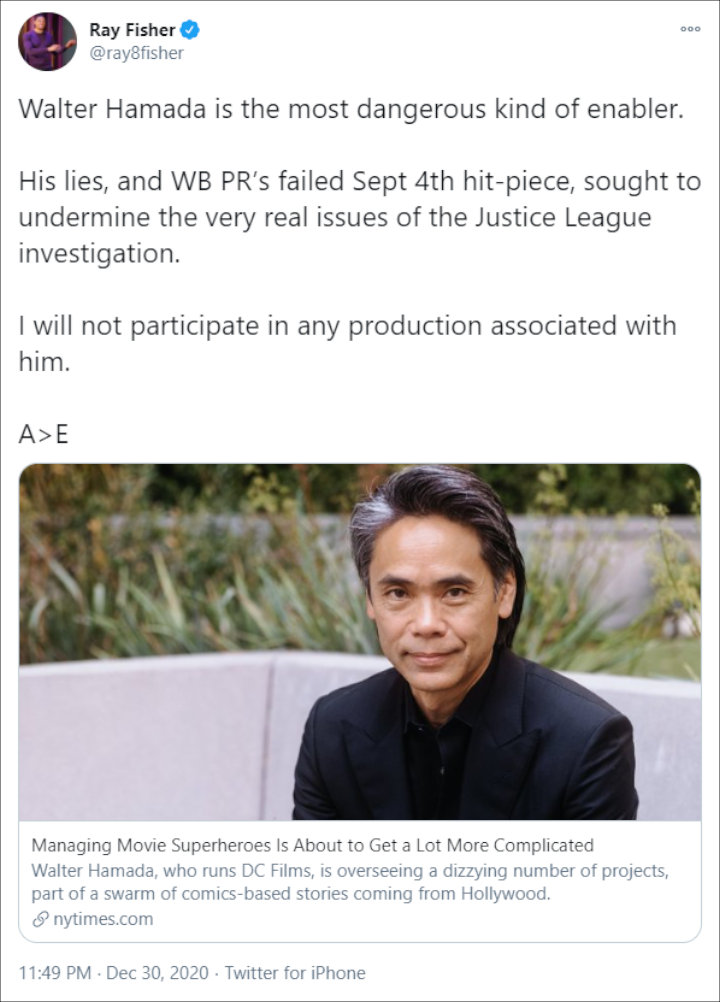 The tension between Fisher and Warner Bros. started after Fisher alleged unprofessional conduct on the set of "Justice League" back in July. "Joss Wheadon's [sic] on-set treatment of the cast and crew of Justice League was gross, abusive, unprofessional, and completely unacceptable," he tweeted at the time.

In response to the allegations, WarnerMedia released a statement on the evening of the Friday of Labor Day weekend. "In July, Ray Fisher's representatives asked DC Films President Walter Hamada to talk to Mr. Fisher about his concerns during the production of Justice League. The two had previously spoken when Mr. Hamada asked him to reprise his role as Cyborg in Warner Bros.' upcoming Flash movie, together with other members of the Justice League," said the statement.

"Notably, Mr. Hamada also told Mr. Fisher that he would elevate his concerns to WarnerMedia so they could conduct an investigation. At no time did Mr. Hamada ever 'throw anyone under the bus,' as Mr. Fisher has falsely claimed, or render any judgments about the Justice League production, in which Mr. Hamada had no involvement, since filming occurred before Mr. Hamada was elevated to his current position," the statement continued.

Fisher reprised his Cyborg role in the extra shoots of Zack Snyder's "Justice League" 10-episode cut, which is scheduled to hit HBO Max next year. Additionally, he participated in the DC Fandome panel for the feature recut and was in talks to return as Cyborg in the upcoming "The Flash" movie. It remains to be seen if things will go as planned considering the tension.