News of the 'Breakfast Can Wait' singer's breakup from her rapper boyfriend comes just weeks after she found herself under fire over colorism issue following her preview of 'Yellow Bone.'

AceShowbiz - DaniLeigh has called it quits with DaBaby yet again. A few hours after her rapper boyfriend challenged his fans to recreate India Love's TikTok video, the "Breakfast Can Wait" songstress declared her single status on social media.

The 26-year-old beauty confirmed her split from the "Rockstar" hitmaker via Instagram Story on Sunday, February 7. She posted a black background note with a simple message that read, "OFFICIALLY SINGLE." Along with the statement, she included one black heart emoji. 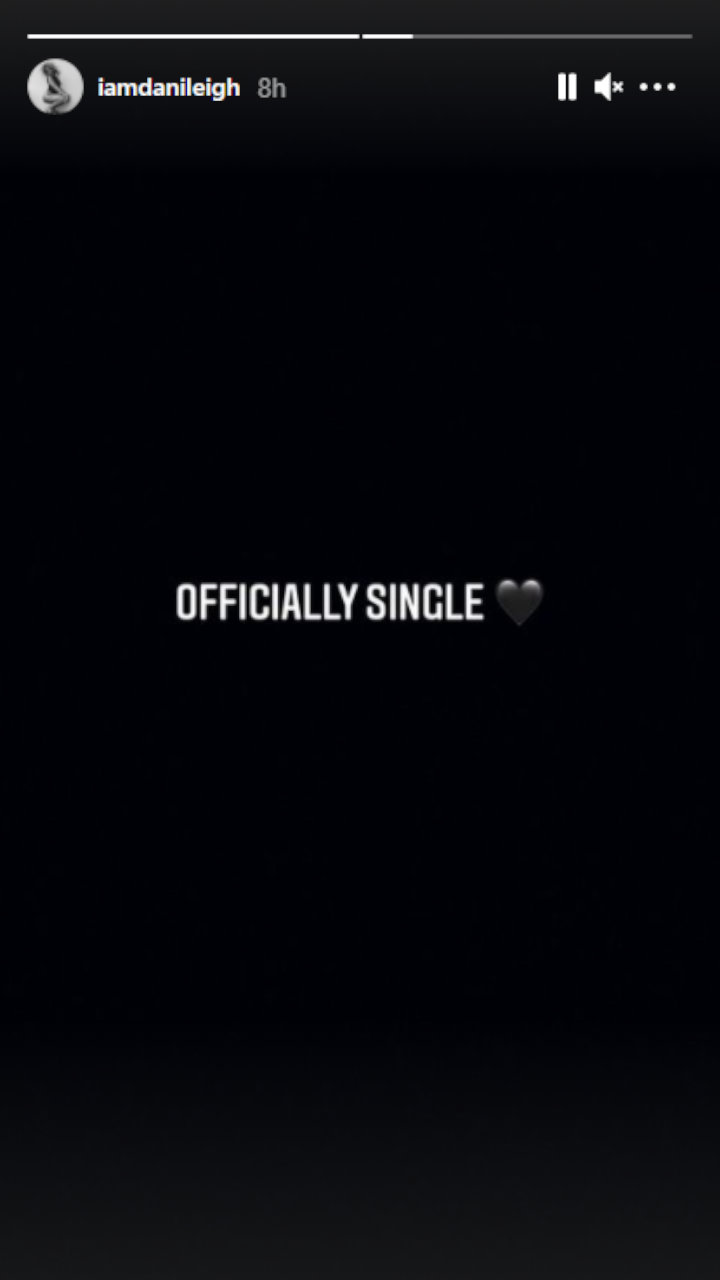 Just an hour earlier, DaniLeigh's now-ex-boyfriend shared on Instagram a video of India dancing to his song "Masterpiece". He captioned it, "This Tik Tok is a #Masterpiece @indialove." He then added, "Morning, Best re-enactment of this Tik Tok gets flown out for a date w/ Baby on Valentine’s Day. #MASTERPIECECHALLENGE. Choosing the winner Friday, February 12th. Starting now.. GO."

The breakup news of DaniLeigh and DaBaby came just weeks after she found herself in hot water over colorism issues following her preview of "Yellow Bone". She has responded to the backlash by stressing that she was just expressing what her ex-beau likes. "That's what he wants, that's what he has," she claimed at that time.

After confirming the split, the "Lil Bebe" singer has since been poked fun at on Twitter. One wrote, "Looooooool so danileigh made that song about her man wanting her cos her bones are yellow and what not and now she's single ?" Another penned, "So the Dani Leigh girl made that colorist anthem only to end up single??? All that showing off and he's already moved on? Lmaoooooooooo lacked respect yourselves."

DaniLeigh and DaBaby began dating in March 2020. They parted ways in July the same year, hinting at the breakup by writing on Instagram, "Before I land.. I wanna tell myself that this is a reset trip... what's not for me God will not allow." They got back together and went Instagram official in early December. The "Easy" singer also appeared in her then-boyfriend's music video "Masterpiece".

DaniLeigh Lashes Out at Starbucks After Receiving a Rotten Danish

DaniLeigh Brushes Off Rumors She Used to Date Prince, Gushes Over Their Friendship