Joining those mourning the sudden passing of the former 'Saved By the Bell' star are Mark-Paul Gosselaar, Tiffani Thiessen and other celebrities, including Loni Love and Kel Mitchell.

AceShowbiz - Dustin Diamond's death has left his former "Saved By the Bell" co-stars devastated. Upon learning the 44-year-old actor passed away from cancer on Monday, February 1, Tori Spelling, Mario Lopez and a number of his other colleagues were quick to express their heartbreak over the sudden loss.

Tori did not take long to send her condolences via Instagram. "My 1st onscreen love Dustin Diamond got his Angel wings today... Before there was David and Donna there was Screech and Violet. Dustin was my first on-screen kiss. He welcomed me with open arms onto the set of 'Saved By the Bell'," she began her message.

"He not only showed me around but made sure I was always ok. Such a young gentleman. He was kind, smart, and always making everyone laugh. He was a great scene partner. He was a really good guy," she added. "I'm sad after the show we never had much contact aside from occasionally running into each other at events. I'm glad he's out of pain. He's an icon to me professionally and personally. RIP Samuel love, your Violet."

Mario, on the other hand, opted to use Twitter to share his emotional tribute. "Dustin, you will be missed my man. The fragility of this life is something never to be taken for granted," the 47-year-old actor tweeted. "Prayers for your family will continue on."

Also mourning the loss was another former co-star Mark-Paul Gosselaar. He tweeted, "Deeply saddened to hear of the passing of Dustin Diamond, a true comedic genius. My sincere condolences to his family and friends. Looking back at our time working together, I will miss those raw, brilliant sparks that only he was able to produce. A pie in your face, my comrade." 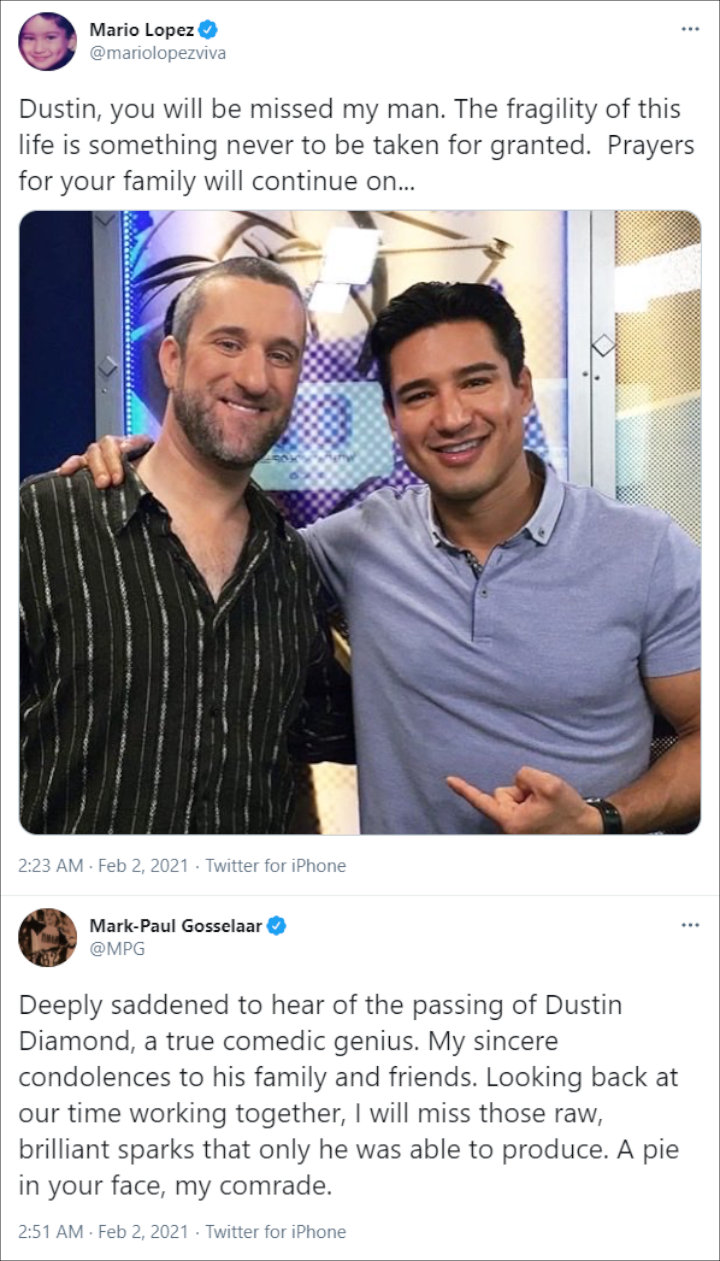 Tiffani-Amber Thiessen, who portrayed Kelly Kapowski on the sitcom, turned to Instagram to express her sadness. "I am deeply saddened by the news of my old co-star @realdustindiamond passing. Life is extremely fragile and it's something we should never take for granted. God speed Dustin," she noted, to which actor Kel Mitchell replied, "praying for you and Dustin's family during this time."

Joining her former castmates in remembering Dustin was Elizabeth Berkley. Putting out several photos of the Samuel "Screech" Powers depicter, she wrote on Instagram, "I'm grateful to have gotten to create with Dustin when we were at the beginning of our dreams coming true. I will hold onto those sweet memories and the laughs we shared. Rest In Peace."

The "Saved By the Bell" stars weren't the only ones posting tributes for Dustin. Comedienne Loni Love tweeted, "Dustin Diamond you really were a diamond who gave the world one of the most lovable tv characters .. thank you for making my childhood a little more funnier.. rest now. Condolences to his family."

Dustin lost his battle with stage 4 carcinoma on Monday just weeks after his hospitalization in Florida. In a released statement, his team shared, "He was diagnosed with this brutal, relentless form of malignant cancer only three weeks ago. In that time, it managed to spread rapidly throughout his system; the only mercy it exhibited was its sharp and swift execution. Dustin did not suffer."

Dustin Diamond in Good Spirits After Completing First Round of Chemotherapy