Aside from the NBA off-season incident, the Minnesota Timberwolves player raves that his girlfriend has been there with him every step of the way, including through the loss of his mother.

AceShowbiz - Karl-Anthony Towns has credited Jordyn Woods for standing by his side throughout difficult times in his life. As he revealed to his social media followers that he was hit by a drunk driver during the 2020 off-season, the NBA star boasted about how his girlfriend help him in his journey to recovery.

The 25-year-old gushed over the 23-year-old model on Thursday, January 28 during a Q&A session on his Instagram Story account. When a fan asked how did he stay so strong after overcoming so much, he first replied by poignantly stating, "My woman has held me down more than the world knows."

Karl went on to mention Jordyn's role in his life. "From my mother and family members dying (1 on her bday in Cabo), getting hit by a drunk driver (was 2pm in the afternoon FYI) in LA this Off-Season and staying with me in the hospital for the night and helping me in rehab, to this stint with COVID she has been there with me every step of the way and stayed ten toes down," he shared.

"My love for her knows no bounds and I would be remiss if I don't acknowledge the power a good woman can have in your life," the Minnesota Timberwolves player continued raving over his girl. He went on to advise other men as saying, "Men, treat your woman like a Queen so she can treat you like a King." 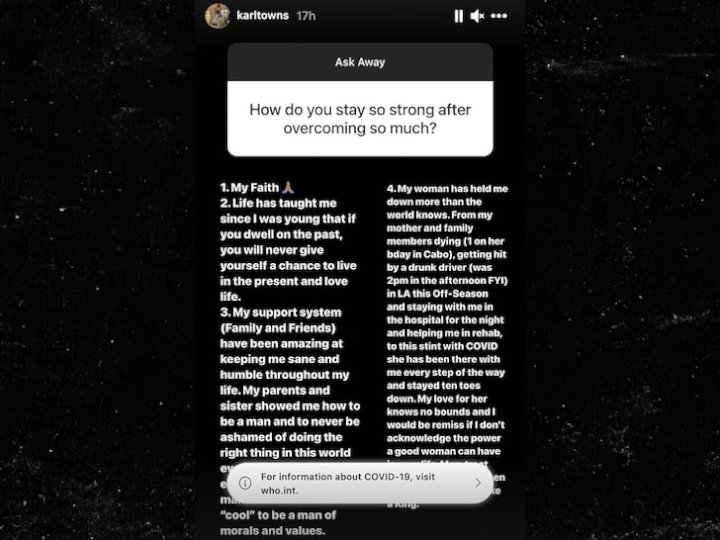 Karl did not offer more details about the drunk driving accident. However, he opened up about his coronavirus diagnosis back on January 15. He declared on Instagram and Twitter, "Prior to tonight's game, I received yet another awful call that I tested positive for COVID. I will immediately isolate and follow every protocol."

One day afterwards, Jordyn offered Karl support on social media and asked her followers to pray for him. Retweeting the athlete's post about his health condition, she wrote, "Praying for you babe. I know you're going to pull through. God's got you and so does your most powerful guardian Angel up there. you're one of the strongest people I know. Please send some prayers up."

Karl and Jordyn confirmed their romance in September 2020 by sharing Instagram photos of them snuggling by the beach. "I found you, then I found me," she captioned it. Her boyfriend, meanwhile, penned in his own post, "There are darknesses in life and there are lights, and you are one of the lights, the light of all lights."