After his model girlfriend assures fans that the two of them have more than a solid relationship, the Minnesota Timberwolves player teases that he already has a marriage proposal in mind.

AceShowbiz - Karl-Anthony Towns has made it clear that he did not cheat on Jordyn Woods. As he and his model girlfriend shut down cheating speculations that have swirled around, the Minnesota Timberwolves player bragged on social media for having the "baddest girl in the game."

The 25-year-old NBA star responded to the cheating rumors via Twitter on Thursday, March 18. "So I got the baddest girl in the game and you think I'm gonna waste my energy with anyone else gtfoh! Same haters we got now are gonna be the same ones we have when I put that ring on her finger," he tweeted.

Also responding to the gossip was Karl's girlfriend, Jordyn, via her own Twitter account. "People really be praying on your downfall," she first penned, before adding in another post, "So crazy how someone can make fake screenshots and send it to blogs and y'all believe it, my relationship is more than solid and I put that on everything."

The former best friend of Kylie Jenner claimed that she and her beau knew the person who sparked the rumors. "For real. Sad thing is we already know who is the root of the rumor." She went on to note, "For real like he doesn't even talk like that." 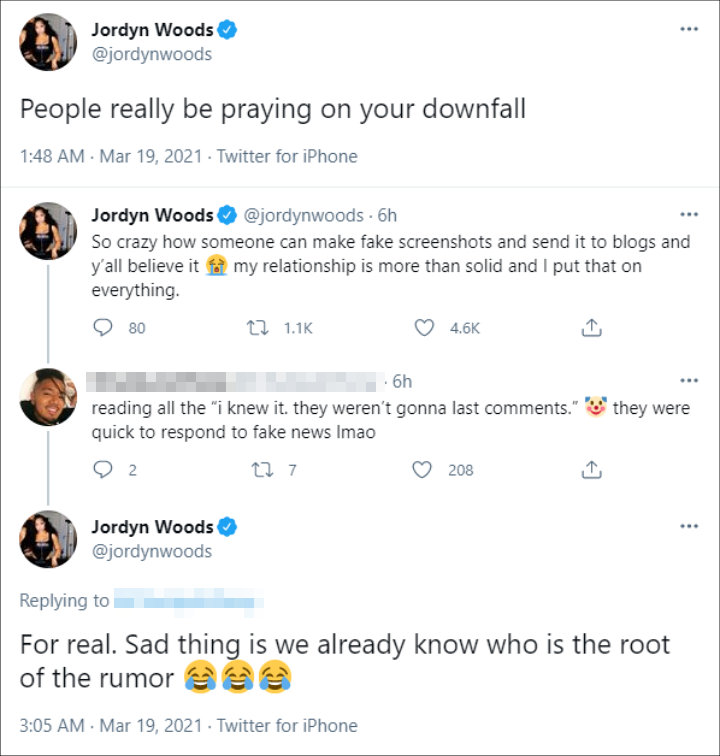 In another tweet, the social media personality raged, "I normally don't address anything but what you're not gonna do is play with my mans character." When someone showed her a screenshot of her boyfriend liking a woman's picture on Instagram, she fired back, "I don't give a f**k what photos my man liked before we were together."

Karl got entangled in cheating rumors after a gossip account on Instagram put out several screenshots of his alleged conversation with an unidentified woman. In the chat, he allegedly told the woman, "Love you." The message also hinted that he could not meet up with the woman because Jordyn is in town. "They should be away next week, she's got work to do in Cali," so read the text.

The woman Karl was alleged to have an affair with was suspected to be Camila Kendra. The model, who is currently in a romantic relationship with "The Bachelorette" alum Tyler Cameron, was quick to dismissed the rumors though. "Fake news," she wrote on Instagram Story. "Not sure why people find it amusing to creat [sic] fake pages and create messages that never happened."