The 'Love of My Life (An Ode to Hip-Hop)' songstress doesn't hold back when commenting on a post about the talk show host's candid confession of her past tryst with the Wu-Tang Clan rapper.

AceShowbiz - Wendy Williams recently made jaw-dropping confession about her one-night stand with Method Man, but at least one person wasn't impressed by this story. Erykah Badu was clearly grossed out when finding out that the outspoken TV personality shared details of her past tryst with the rapper.

The 49-year-old Grammy Award-winning artist let her feelings be known to public as she commented on The Shade Room's post about Wendy's interview with DJ Suss One. Not holding back, she simply wrote underneath the clip of the interview, "Yuk." 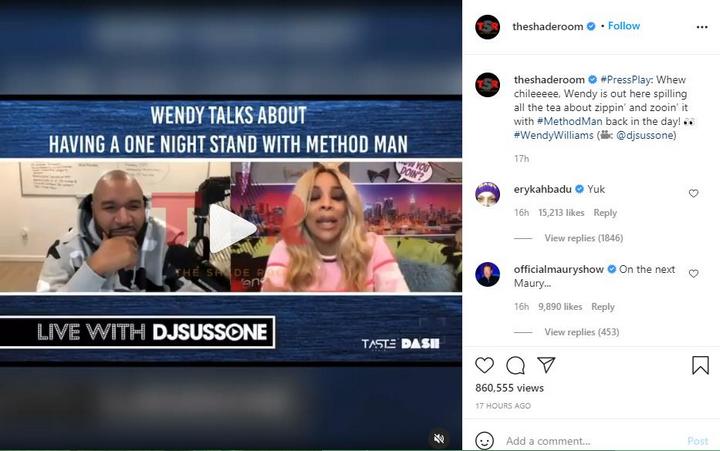 Wendy discussed her drug issues during the interview before the topic switched to her alleged sexual encounter with the former Wu-Tang Clan member. She recalled taking the rapper to her penthouse pad one night, but didn't reveal the timeline of their alleged hookup.

"The only thing I did... I smoked a blunt with Method Man while I gave him a bath and it was a one-night stand," she candidly revealed. The 56-year-old added that the story would not be included in her upcoming Lifetime biopic "Wendy Williams: The Movie" because she won't risk reviving their feud. "And he'll deny it, maybe not. It wasn't in the [biopic] because Method Man is still very angry at me. I don't know [why]. For being me, for telling the truth," she argued.

As for what set off their beef, it started in 2006 when the talk show host shared to public private information about his wife's battle with cancer. Not appreciating it, Meth blasted the writer. "Wendy gets on the air and said [Method Man] 'his wife is sick and she not doing too well' and I'm like this f***ing b***h, man," he said at the time.