In a series of photos she shared via Instagram Stories, the 'My Name Is Dark' singer reveals her getting hands-on in styling 8-month-old X AE A-XII's hair into some sort of mohawk.

AceShowbiz - Grimes has given her baby a little hair makeover. The "My Name Is Dark" singer, who welcomed X AE A-XII with boyfriend Elon Musk more than eight months prior, took to social media to show off her first child's "Viking"-inspired haircut that she did herself at home.

The 32-year-old mom turned to Instagram Story on Thursday, January 28 to share a picture of her son rocking a new hairstyle as he played with toys in the bathtub. "not sure this haircut went well but he's Viking now," she wrote in the accompaniment of the post.

Grimes, whose real name is Claire Boucher, added another snap that displayed her trimming her baby's hair while he was busy with his toys. In her third post, she spilled on the inspiration behind her tot's new look. "Haircut inspired by [The Last Kingdom] on Netflix which is a masterpiece," she wrote alongside a shot of his baby sporting some sort of mohawk. 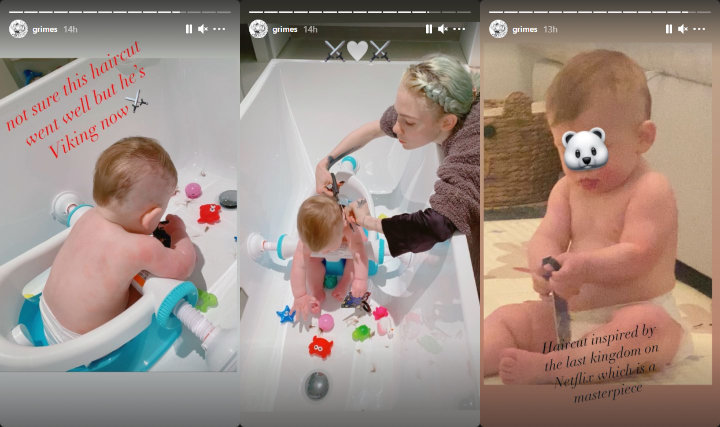 Grimes showed off her child's 'Viking'-inspired haircut that she did herself at home.
See also...

Grimes and Elon welcomed Baby X back on May 4, 2020. The couple initially named him X Æ A-12, but changed it to X Æ A-XII on his birth certificate. Two days after giving birth, the Canadian musician explained the meaning of the baby's unique name on social media.

"X, the unknown variable," Grimes explained on Twitter on May 6. "Æ, my elven spelling of Ai (love &/or Artificial intelligence) A-12 = precursor to SR-17 (our favorite aircraft). No weapons, no defenses, just speed. Great in battle, but non-violent... A=Archangel, my favorite song."

In July the same year, Grimes' baby daddy Elon opened up about how they are parenting their child. "Well, babies are just eating and pooping machines, you know? Right now there's not much I can do. Grimes has a much bigger role than me right now," the Tesla CEO said in an interview with The New York Times.

"When the kid gets older, there will be more of a role for me," the tech mogul added. "I think just doing what I've done with my other kids. If I have a trip for Tesla to China, for example, I'll bring the kids with me and we’ll go see the Great Wall or we took the bullet train from Beijing to Xian and saw the Terracotta Warriors."