The 32-year-old singer, whose real name is Claire Boucher, takes to her Twitter account to reveal the meaning of the name of her and the tech mogul's baby, though people are still confused.

AceShowbiz - New parents Grimes and Elon Musk have indeed a curious name to give to their newborn baby. Instead of going with conventional names like other parents, the singer and the tech mogul opt to give their baby a bizarre name which is hard to pronounce, X Æ A-12 Musk.

When Elon tweeted that, people initially thought he was joking. However, Grimes has just confirmed that that's really her son's name and took to her Twitter account to reveal the meaning of the name.

"X, the unknown variable," she tweeted on Tuesday, May 6. "Æ, my elven spelling of Ai (love &/or Artificial intelligence) A-12 = precursor to SR-17 (our favorite aircraft). No weapons, no defenses, just speed. Great in battle, but non-violent."

The 32-year-old singer, whose real name is Claire Boucher, went on saying, "A=Archangel, my favorite song," before adding a rat and sword emoji. 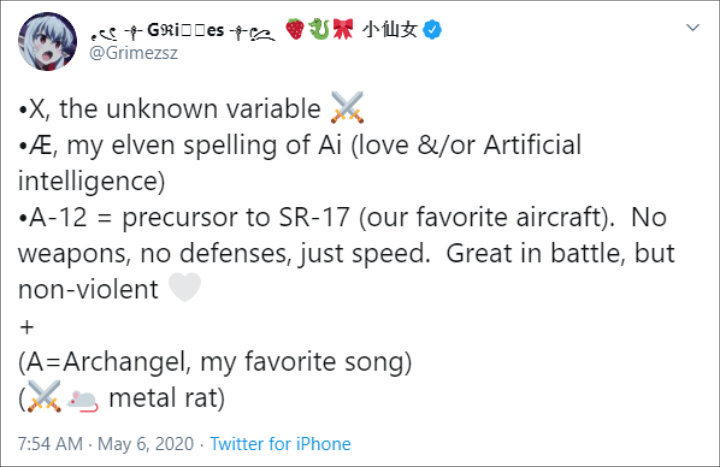 Grimes explained the meaning of her and Elon Musk's baby's name.

The tweet, however, barely explained anything. Fans online then speculated that the name is code for Ash Archangel. That was because Æ is pronounced "Ash", while the A-12 aircraft mentioned in Grimes' tweet was nicknamed "Archangel."

Grimes gave birth to her son on Monday, May 4. Elon announced the baby was "a few hours away" via Twitter and returned to the social media site to reveal "mom & baby (are) all good." Later that night, the founder of Tesla and Space X shared the first picture of his baby in response to a fan's comment.

In the snap, the 48-year-old could be seen cradling the baby, who was wrapped in a pink and blue blanket. He then shared a close-up shot of his son's face, with a tattoo filter applied. When someone said they liked the filter, Elon replied, "Thanks :) Never too young for some ink haha."

This is the first child for Grimes, while Elon is no stranger to the world of fatherhood. He shares five sons with Canadian author ex-wife Justine Wilson, and also tragically lost another one, his first child, at just 10 weeks old from SIDS (Sudden Infant Death Syndrome).

Grimes Tests Positive for Covid-19, Says She 'Weirdly' Enjoys It