The 'Dark Horse' hitmaker claims that she is 'about 95 per cent ready' to fully embrace life as a vegan after gradually cutting down on animal products since becoming a first-time mother.

AceShowbiz - Katy Perry is preparing to fully embrace life as a vegan after gradually cutting down on animal products since becoming a first-time mother.

The "Dark Horse" hitmaker welcomed her daughter Daisy, with fiance Orlando Bloom, in August (20), and reveals she has been trying to stick to a plant-based diet ever since.

And Katy hasn't been doing it all alone - her pet pooch has also recently ditched meat.

Although some followers were sceptical about the impact a vegan diet would have on her furry friend's health, representatives at PETA (People for the Ethical Treatment of Animals) voiced their support for Perry and Nugget, and also provided a link to a number of plant-based foods and treats ideal for dogs.

"Wonderful news!" a PETA spokesperson responded online. "We're SO happy for you-and for Nugget, too. You'll both love how it feels eating clean and helping animals." 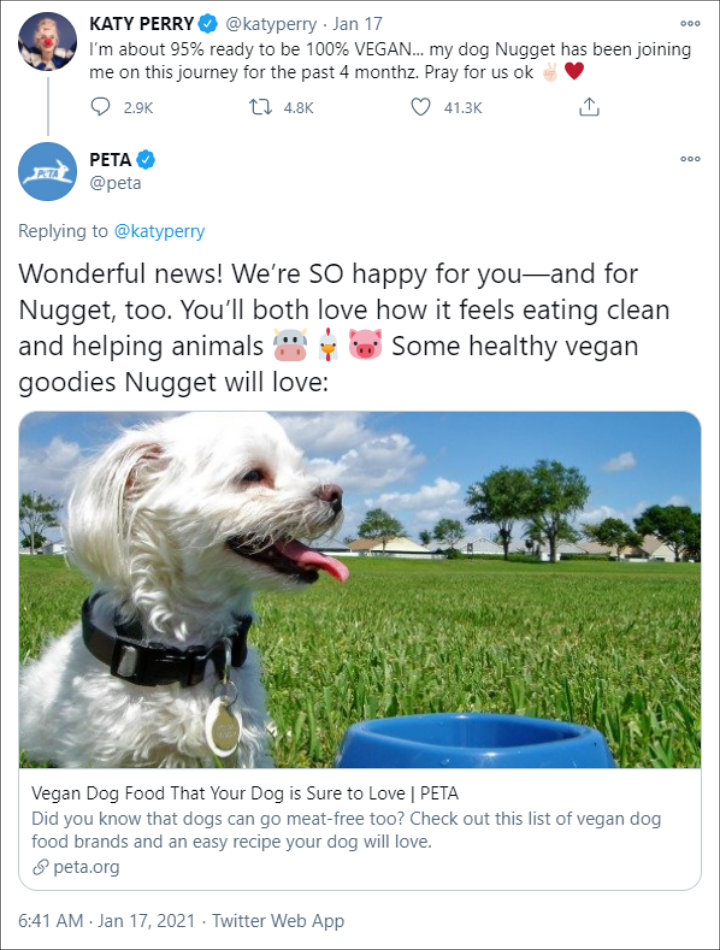 PETA reacted to Katy Perry's declaration about turning herself and her dog into a vegan.

It's unclear if Orlando will also be joining the pair in going vegan, but the pop star will be able to turn to model Miranda Kerr - the British actor's ex-wife - for a little advice in clean-eating as she has been following a largely vegan diet for years.

Orlando and Miranda, who share 10-year-old son Flynn, have maintained a close friendship since divorcing in 2013. She is now married to Snapchat co-founder Evan Spiegel, the father of her two younger boys.