Before getting the all clear, the ex-husband of Mandy Moore maintains he never 'engaged in inappropriate online sexual communications with someone he knew was underage.'

AceShowbiz - Rocker Ryan Adams has reportedly been cleared following an FBI investigation into alleged inappropriate correspondence between him and underage girls.

Agents found no evidence that would support charging the singer with a crime, according to a Page Six source, and closed the investigation without charges.

Reporters for the New York Times claimed they had seen "extensive communication" between Adams and a young fan in 2019, and said he and the girl had exchanged more than 3,000 text messages, including explicit photographs.

The subject, who claimed she was 14 when she first connected with Adams, told the Times they never met but would chat over Skype, while revealing she lied about her age when he reportedly asked her to prove she was 18.

Adams has always maintained he never "engaged in inappropriate online sexual communications with someone he knew was underage."

The scandal hit as several women came forward to accuse the rocker of using the promise of career help to lure them into romantic relationships before emotionally abusing them as part of a Times expose.

Adams tweeted, "The picture that this article paints is upsettingly inaccurate. Some of its details are misrepresented; some are exaggerated; some are outright false." 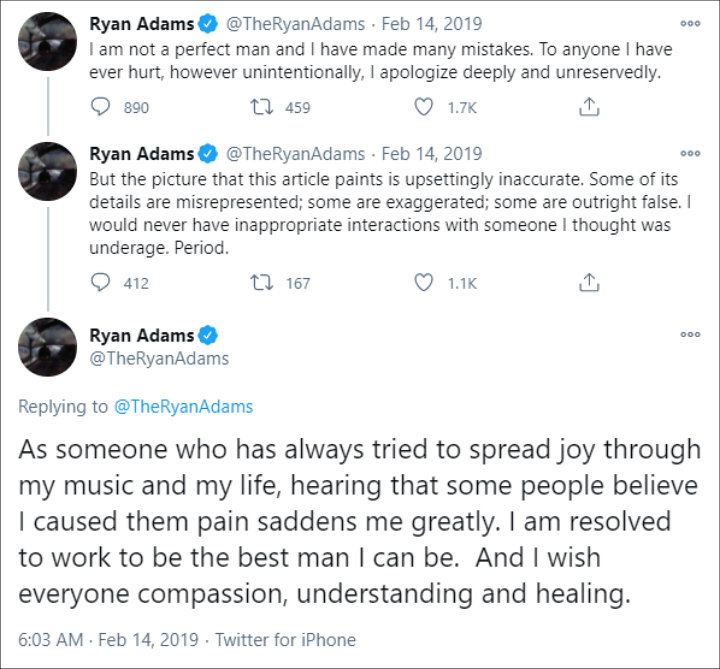 Ryan Adams reacted to the New York Times' report of his correspondence with underage girls.

Adams' ex-wife, singer and actress Mandy Moore, has also accused him of psychological abuse, telling podcast host Marc Maron that she felt like she was "drowning" during the pair's marriage.

After the New York Times piece was published, Adams apologized "deeply and unreservedly" to anyone he had hurt.