After JT and Asian traded shots at each other on social media over the latter's complaint to Meg, Miami comes in her City Girls groupmate's defense while Ray is taunting the girls.

AceShowbiz - JT and Asian Doll a.k.a. Asian Da Brat's feud is getting uglier, with more parties getting involved in it. The two rappers started beefing on social media after the latter revealed her unreleased verse on Megan Thee Stallion's song "Do It on the Tip", which ended up featuring City Girls instead.

As JT and Asian continued to trade jabs online, Yung Miami came in her groupmate's defense by firing back at Asian, "B***hes been salty since 'Act up!' " The "Road Runner" spitter then responded, "B***h you've been singing my songs since I been dropping h*e. The only song I got took off with was Meg and Frego song. Cause I was washing you b***he's literally."

Asian was seemingly ready to have a head-to-head confrontation with JT as she wrote, "Let me know when a b***h got a location ready to meet up." That's when Rolling Ray entered the conversation. Taunting the girls, he wrote, "I got Santana big body a**, you got JT & we can call CPS on Caresha for the day. She ain't going nowhere."

Not having it that Ray chimed in their business, Miami lashed out at him, "Rolling Ray chill fr. I'll beat tf outta you respectfully. All I gotta do is push you down!" Ray then advised Miami to delete her tweet at him while launching his own threat at her, "You knew to delete that tweet... Now purr that... You cute and all, but I'll put you in a wheelchair and have them calling you Rolling Resha."

Ray accused JT, Miami and Asian of bluffing, prompting Miami to fire back, "Rolling ray let me see you sucking a d**k in a chair impress me." She continued insulting the wheelchair-bound social media sensation, "Cause fr rolling ray that won't even be a fair fight imma just walk up and punch you in your head leave me alone!"

Ray then mentioned Miami's late baby daddy as he tweeted, "Digg your baby father up b***h.. Tell em how much you turned into a power bluff girl." Miami got ever more upset as she responded to him, "I swear on my kids imma make that b***h walk again!!" She added in another tweet, "On my dead baby daddy you better hope I never run into you retarded b***h imma spit in your face and make you eat dirt on my kids RIP!!!"

Miami then sent her last messages to Ray before she called it a day. "Let me make this very clear before I go to sleep I've been ignoring rolling ugly for a month now Idk him or where tf he come from it was always a lil LOL for me because clearly you're delusional WE NEVER EXCHANGED words but tonight was the night & you took it to far!" she wrote. 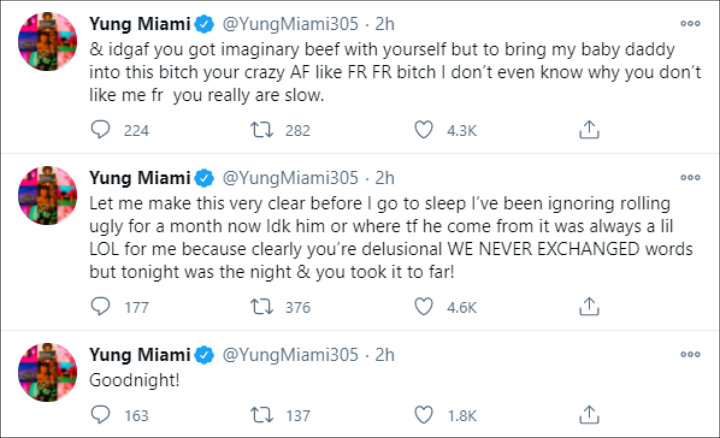 "& idgaf you got imaginary beef with yourself but to bring my baby daddy into this b***h your crazy AF like FR FR b***h I don't even know why you don't like me fr you really are slow," she blasted him, before ending it with, "Goodnight!"

She added in another tweet, "Asian, you know me better than that you know I don't like all this internet s**t." Blasting the "Barbie Everywhere" raptress as a "hot head," the "Hot Girl Summer" raptress went on, "You blow s**t out of proportion because you're a f**king hot head. You played the song live...that was that. What do I need to clear up? This is dumb."