Josh Kelley insists that his actress wife had not said anything that provoked her former 'Grey's Anatomy' co-star from tweeting he will never stop exercising his free speech.

AceShowbiz - Katherine Heigl's husband Josh Kelley has accused her former "Grey's Anatomy" co-star Isaiah Washington of using the actress for "free fame," after he reignited their long-running feud with a provocative tweet.

Washington took to Twitter on Monday, November 16, to share a photo of Heigl, alongside which he accused her of previously declaring he should never be allowed to speak publicly.

"This woman once proclaimed that I should 'never' be allowed to speak publicly again," he wrote. "The world agreed with her proclamation back then and protested for my job and my head in 65 languages. I wish I was on Twitter in 2007, because I will NEVER stop exercising my free speech." 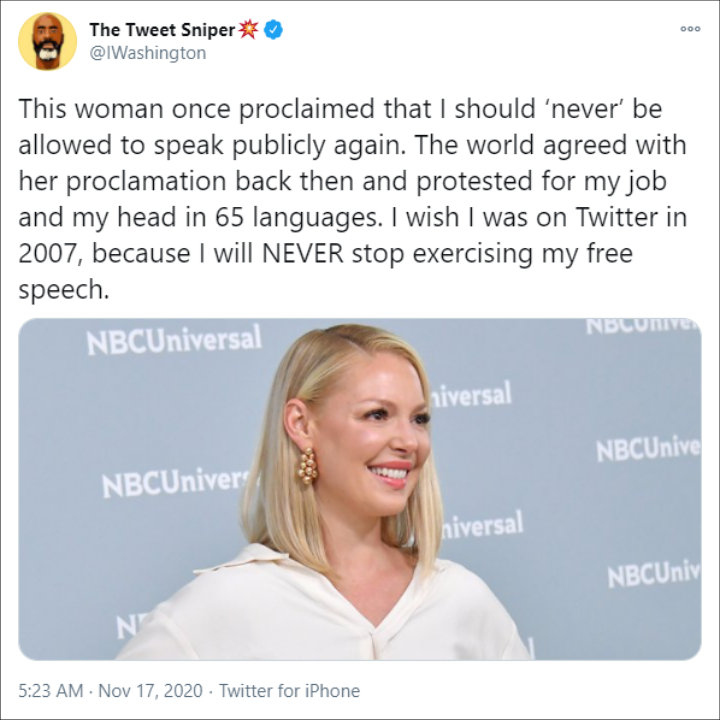 "I've learned that all money ain't good money and no amount of money can replace your dignity and integrity. Some call it living by your principles," he added in another tweet.

Following the tweets, Extra presenter Billy Bush reached out to Kelley, who confirmed that Katherine hadn't said anything to warrant such an attack.

"The only thing I can think of is people want to use her name for free fame," he added.

Heigl, who played Isobel Stevens on the show, previously alleged Washington had made a homophobic slur towards their co-star T.R. Knight on set.

He later addressed the claim at the 2007 Golden Globe Awards, prompting Heigl to reportedly declare that Washington "needs to just not speak in public." Within months, ABC announced the actor would not be returning to the show for its next season.

He is said to have penned an official apology and also shot a PSA for gay rights supporters, GLAAD.