Hours after Gleb announced his split from Elena Samodanova, the 'Selling Sunset' star shares on Instagram that she wishes 'nothing but the best for both Gleb and Elena during this unfortunate time.'

AceShowbiz - Gleb Savchenko's split from his wife of 14 years Elena Samodanova has nothing to do with Chrishell Stause, the latter insists. After her "Dancing with the Stars" partner announced his split from his wife, the "Selling Sunset" took to her Instagram account on Friday, November 6 to claim that she isn't in romantic relationship with Gleb.

"I am so saddened about the news of Gleb and Elena's split. It is unfortunate that this has caused rumors to swirl about my personal life," the 39-year-old reality TV star wrote on Instagram Stories. "Having gone through a public split myself, I would not wish this on nyone," she added, referring to her divorce from "This Is Us" actor Justin Hartley.

"As you can imagine, the countless hours of training, and dance rehearsals has created a strong supportive friendship, but nothing more," said Chrishell, who was eliminated from season 29 of "DWTS" in the November 2 episode. "I wish nothing but the best for both Gleb and Elena during this unfortunate time." 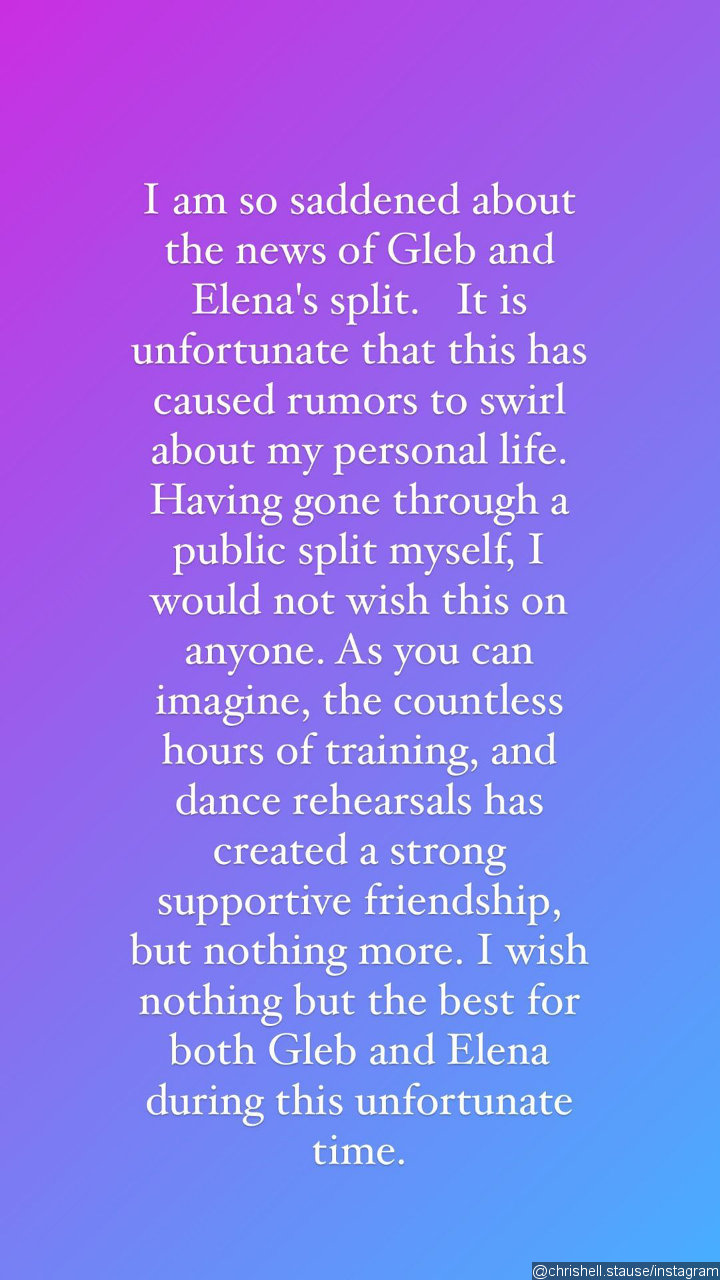 Chrishell Stause denied having an affair with Gleb Savchenko.

Chrishell's post arrives just hours after Elena and Gleb announced their separation in a joint statement. "After 14 years of marriage with my deepest sadness our road is coming to an end," the "So You Think You Can Dance" choreographer wrote alongside a photo of herself with the ballroom dancer, adding a broken-heart emoji.

Gleb then confirmed it on his own Instagram page. Alongside a picture of the two and their children, he wrote, "It is with a heavy heart that I tell you my wife and I are parting ways after 14 years of marriage. We still intend to co-parent our wonderful children together who we love so dearly, and we will strive to continue to be the best parents that we can to them." The 37-year-old father continued, "We ask that you respect our family’s need for privacy and healing during this time."