The former 'True Jackson' actress feels 'sad' as one of her online followers criticized her for dating a white model following her public display of affection with boyfriend.

AceShowbiz - Keke Palmer reacted to a fan who criticized her for dating a Los Angeles white model named Mae Seven. The former Nickelodeon actress, now 27, was saddened as one of her online followers described her boyfriend as "colonizer."

It all started when Keke called out hypocritical people in her cryptic tweet. Without naming anyone, she wrote, "I see a lot of people living one way but voted another." When a follower scoffed, "Like you?" the star fired back, "Sorry sis. I'm not in the mood for pseudo shade rn lol."

Then the fan explained their issues with Keke. Apparently they were not impressed by her new boyfriend as they responded, "Oh it's no shade at all love. I still rocks with you…but you kissing that colonizer etc just wasn't the move in this time right now [shrug]. But again if it's not that than that's on me I'm grown to admit that."

Keke quickly replied, "lol I'm sad this was what you choose to tweet me about. Girllllll God bless."

The criticism came a few days after Keke posted a video of her PDA with boyfriend. She locked lips with him and wrote in her caption, "Rare footage of me in the process of becoming randomly suspicious of someone I trust because I struggle with distinguishing reality from my crippling anxiety and emotional trauma."

The PDA video also sparked comments from a Los Angeles-based comedian/writer Ashley Ray. "Well I knew she liked white guys but only cuz we slept with the same white guy so step off my good sis," the comedian wrote in a post-and-delete tweet. 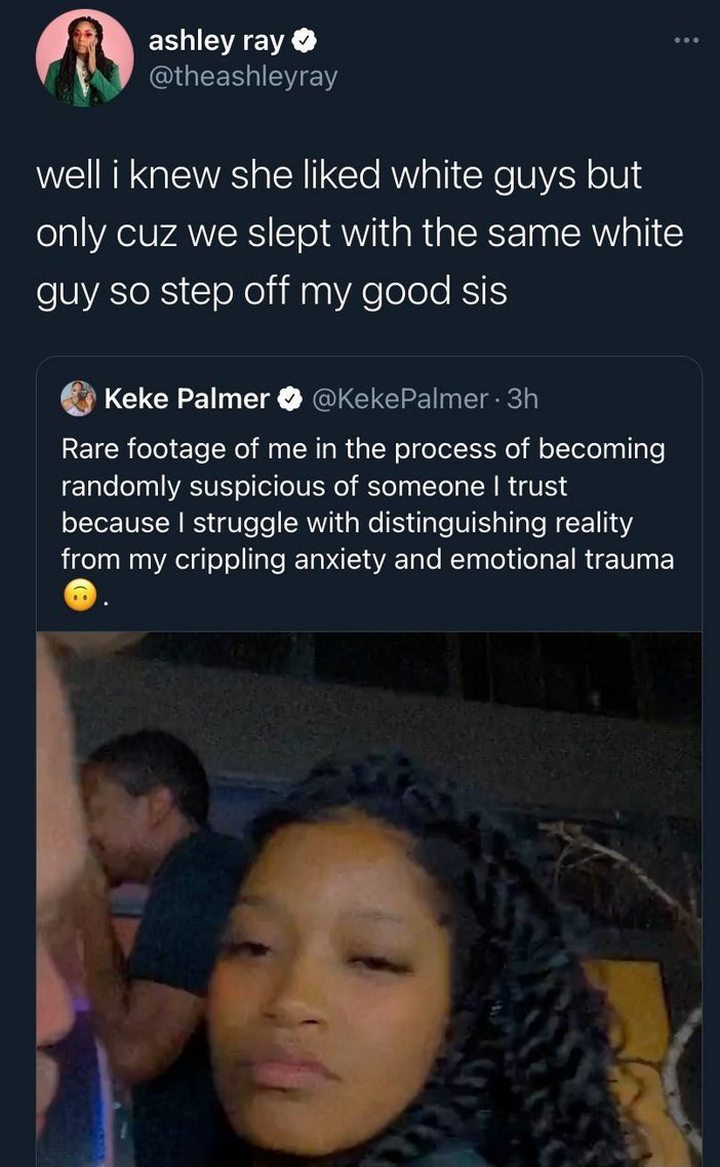 Ashley Ray responds to video of keke Palmer and her boyfriend

Keke Palmer was first caught thirsting over Mae Seven on Instagram early this year. In a photo of his wearing an unbuttoned denim jacket, she flirted, "You have to make a decision. Either your jacket is on or it's off sir," to which he replied, "What can I say... indecisiveness is a real thing honey," and she responded, "Not with matters of heart... clearly."

They started to hang out together before eventually becoming a couple.

Earlier this year, she admitted she preferred to date non-celebrity. "Not that I wouldn't give someone a try. But trying to keep my private life outside of my work life, to me, it's easiest when you don't date someone with the same career," she explained. "And it's not just romantic relationships. It's friends too."

Last year, she turned down "The Bachelorette" alum Mike Johnson when he asked her out on live TV. "He asked me in front of everybody," she said. "I felt totally like, ambushed. I felt ambushed. I felt like it was a big ol' gag. I've been doped."

Keke Palmer on Her Battle With Polycystic Ovary Syndrome: I Do Not Give Up on Myself