The 'Bad at Love' singer shows off her impressive makeup skills as she shares pictures of her turning into a bloody version of her 'Manic' album's cover art and Emily the Corpse Bride in Tim Burton's movie.

AceShowbiz - Halsey is already in the Halloween mood. Just days before the spookiest night of the year comes around, the "Bad at Love" singer treated her social media followers to her scary transformations by recreating her "Manic" album's cover art with a touch of horror and channeled Emily from "Corpse Bride".

Making use of Twitter and Instagram on Thursday, October 29, the 26-year-old singer/songwriter first showed off her artistic skills by putting out a close-up photo of her sporting a bloody hole on her right eye. "MANIC, but make it Horror," she tweeted in accompaniment of the picture.

Hours later, the ex-girlfriend of G-Eazy came up with another thrilling makeover. Alongside several photos of her dressing up as the lead character from Tim Burton's 2005 film, she made a reference to the line in the movie as writing, "It takes my breath away! Well it would if I had any..."

Halsey's fans undoubtedly were left amazed by her makeup skills and were quick to leave enthusiastic replies. "HOW LONG DID THIS TAKE. HOW ARE YOU SO TALENTED. B***H, YOU SURPRISE ME WITH YOUR SKILLS EVERY SINGLE DAY," "SIIIIIICK u did this urself ? Teach us your ways girl" and "OMG!! this is so sick!! How long did it take you?" were some of their comments.

Many also flooded Halsey with questions if she did the looks herself. In response to the inquiries, the "Without Me" hitmaker penned another tweet wherein she stated, "a lil FAQ: yes I do my own makeup, yes I did break out afterwards lmao."

Halsey said she did her Halloween looks herself. 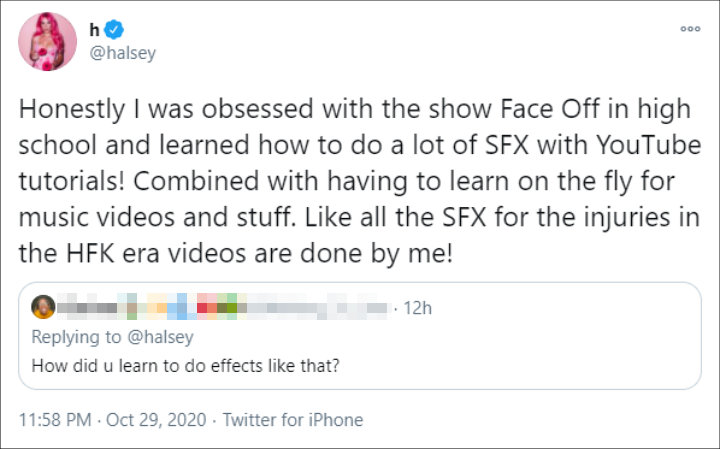 Halsey explained where she learned the effects on her face.

In a separate tweet, Halsey additionally explained where she learned to do such effects on her face. "Honestly I was obsessed with the show Face Off in high school and learned how to do a lot of SFX with YouTube tutorials! Combined with having to learn on the fly for music videos and stuff," she dished. "Like all the SFX for the injuries in the HFK era videos are done by me!"

Halsey Shaves Her Head Because She Misses Being Bald - See Her New Look!

21 Savage Shares His Regret After Brother's Death in Alleged Stabbing

Mulatto Dragged for Calling Herself Black