The First Daughter takes to Twitter to wish her little sister a happy 27th birthday along with a sweet throwback photo of them, but she tags the wrong person.

AceShowbiz - Ivanka Trump has somehow managed to get on a social media user's nerves during a happy occasion. When offering a birthday tribute for her younger sister Tiffany Trump, the first daughter of Donald Trump managed to get herself being branded "lame" by one of her haters simply because she tagged a wrong person.

The 38-year-old businesswoman initially made use of Twitter on Tuesday, October 13 to celebrate her sister's 27th milestone. Alongside a throwback picture of the two, she tweeted, "Happy birthday @tiffanytrump! Hope this year marks your best turn yet around the sun! Love you so much!" Tiffany's correct handle, however, was @tiffanyatrump, reflecting her middle initial Ariana.

Ivanka, however, did not seem to realize that she accidentally tagged a profile with zero follower and no display picture, setting the Internet abuzz with negative feedback. One user, in particular, was vocal in expressing a scorn over the error by writing, "Lame. That's NOT Tiffany's acct, nimrod." 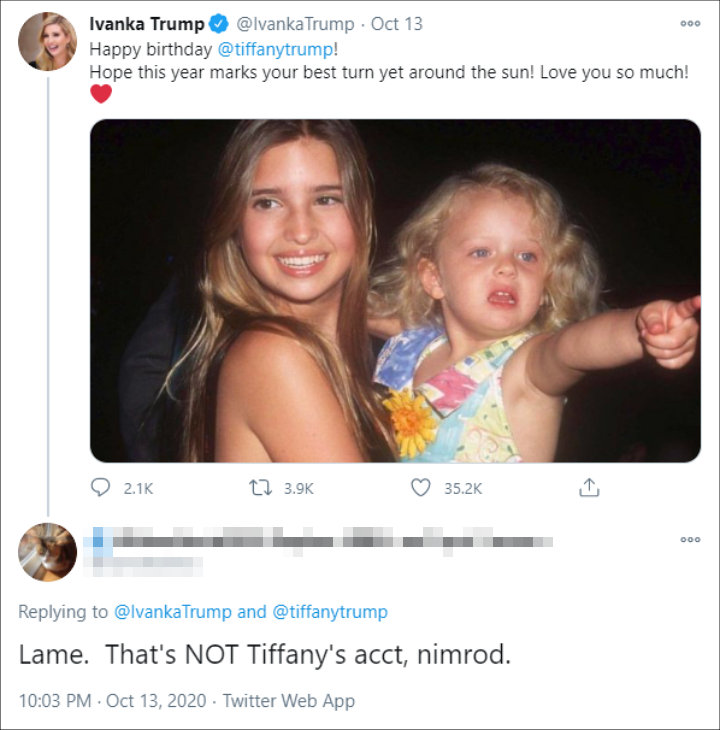 Ivanka Trump was trolled by her follower for tagging a wrong Tiffany Trump.

Another user joined in the bashing by tweeting, "I reckon your birthday wishes don't mean as much when you can't even tag the right account." A third user also poked fun at the wife of Jared Kushner by writing back, "That's hilarious! Pre plastic surgery AND you tagged the wrong Tiffany. What a big sister."

Not stopping there, another critic sarcastically suggested, "How about this. Instead of saying it on Twitter and tagging an unused account, you, I don't know, call her and tell her? Or did you forget her phone number?" A fifth person, in the meantime, simply pointed out, "You tagged a #Bot."

Although Ivanka tagged a wrong person, her dedication for Tiffany did not go unnoticed by her younger sister. Donald's daughter with his second wife, Marla Maples, retweeted her birthday wishes on her own official Twitter account, which has more than 800,000 followers.

This was not the first time the mother of three got trolled by haters. Back in July, the businesswoman found herself being criticized after taking to Instagram to share a photo of herself taking part in the "Challenge Accepted" trend that claims to be about "women supporting women."

While she encouraged others to "be kind to each other" and to "choose to love, support and strengthen one another", in her post, many deemed her hypocritical. One person pointed out, "Your dad hates the poor and women." Another sarcastically asked, " 'Let us be kind to each other'..... Have you met your Dad?"