The 'Game of Thrones' alum looks effortlessly stylish in a gray shirt with high-waisted leggings that flaunt her flat stomach while going for a stroll with her husband and their daughter Willa.

AceShowbiz - Sophie Turner and Joe Jonas have been seen with their newborn daughter for the first time. On Wednesday, October 7, the couple stepped out in Los Angeles for a walk with their baby daughter Willa in a stroll.

In pictures obtained by Daily Mail, the 24-year-old British actress looked effortlessly stylish in a Brandy Melville's Raisin' Hell graphic tee with a high-waisted black leggings, flaunting her impressively flat tummy after only two months of giving birth to her first child. She completed her cool style with black lace-up boots and a pair of black square studded Celine sunglasses. She later put on a black leather jacket with a huge American flag on the back to keep herself warm.

The Jonas Brothers member, meanwhile, donned a black T-shirt topped with a yellow plaid jacket, black jeans and black Converse sneakers. The pair were both wearing black face masks for safety. The two took turn pushing the baby stroller during the walk. 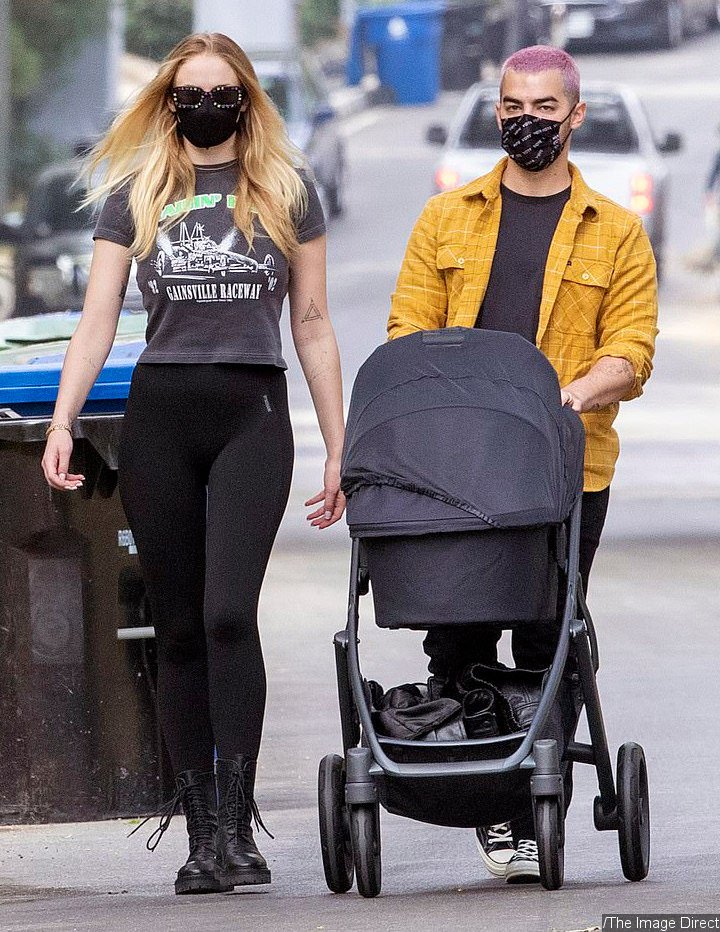 Sophie and Joe tied the knot in an impromptu ceremony at A Little White Wedding Chapel in Las Vegas, Nevada on May 1, 2019, immediately after the 2019 Billboard Music Awards. They later held a lavish reception on June 29 of the same year in France.

The couple announced their baby's birth in late July. "Sophie Turner and Joe Jonas are delighted to announce the birth of their baby," their publicist Gertie Lowe said in a statement to the press at the time.

A source told ET of the first-time parents, "Joe and Sophie welcomed a baby girl last Wednesday in L.A. and are over the moon. The couple is already obsessed and can't stop gloating about their new addition."

The pair, who have been holed up in their L.A. home during the COVID-19 pandemic, are apparently planning to continue enjoying this moment in private for a little longer as the source added, "The couple is taking time to enjoy this special moment and have only shared the news and updates with family and friends. With the pandemic Joe and Sophie have been very cautious about who is around them and their little girl."

Eminem and Nick Cannon's Beef Is Allegedly 'Over'