Maren Morris, Lea Thompson and Sean Penn have also reacted to the 45th POTUS' reflection about what he has achieved in the past three years in the White House.

AceShowbiz - Mia Farrow and Sophia Bush were among the stars slamming Donald Trump as the President delivered a speech at the Republican National Convention on Thursday night (August 27).

The 74-year-old POTUS officially accepted the Republication nomination to put himself forward as their candidate in the U.S. election in November. Taking the podium, the businessman-turned-politician used his speech to reflect upon what he's achieved in the past three years in the White House.

"This election will decide whether we save the American dream or whether we allow a socialist agenda to demolish our cherished destiny," he said.

"Your vote will decide whether we protect law-abiding Americans, or whether we give free rein to violent anarchists, agitators, and criminals who threaten our citizens."

He also patted himself on the back for the way he has dealt with the coronavirus pandemic, and it was these remarks that sparked the most ire from celebrity viewers at home.

"Its as if we are not in the midst of a raging pandemic that has killed more than 180,000 Americans. Scientists say that 80% of these deaths could have been avoided if we had had strong, involved, science driven leadership. Tonight st the RNC i see a dictator & his cult," Farrow commented, while Bush referred to the president by his nickname 'The 45' as she tweeted, "45 says China could've stopped a virus ... that he has been incapable of stopping? Cool. Seems super logical. What a tw*t." 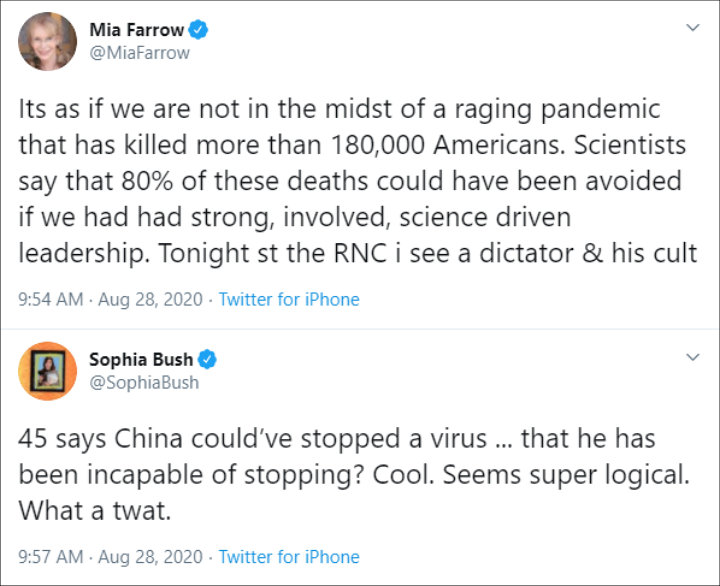 Country singer Maren Morris wrote, "I wonder if the loved ones of the 180,000 dead Americans are watching this speech applauding his "pioneering of the fatality rate," while actress Lea Thompson commented, "Donald Trump claims to be the 'Law and Order' president. Probably because he ORDERS so many people to break the LAW. #TrumpChaos." 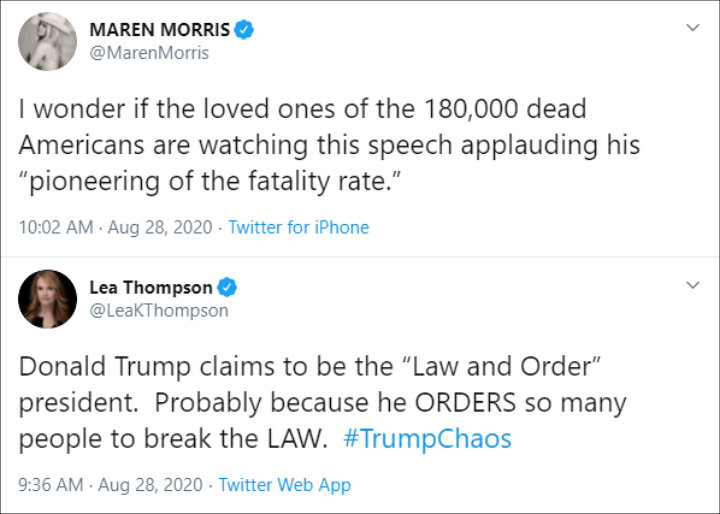 And Sean Penn referred to the unmasked and un-socially-distanced crowds listening to Trump on the South Lawn of the White House in Washington, D.C.

"Tonight, speaking to a crowd of unmasked & undistanced worshippers, the president offered a rare moment of Covid 19 candor, when he stated, 'We have pioneered the fatality rate'," he tweeted.