The thrash metal band remembers the 34-year-old vocalist as 'a larger than life rock star and a humble and giving friend' while confirming his passing in a statement posted on Twitter.

AceShowbiz - Power Trip's leader Riley Gale has passed away at 34 years old. The thrash metal band announced the sad news in a statement released via its official Twitter account, confirming that the vocalist died on Monday night, August 24.

"Dear Power Trip fans worldwide," so the statement posted on Tuesday, August 25 began, "It is with the greatest of sadness we must announce that our lead singer and brother Riley Gale passed away last night."

"Riley was a friend, a brother, a son," the band remembered its vocalist. "Riley was both a larger than life rock star and a humble and giving friend. He touched so many lives through his lyrics and through his huge heart. He treated everyone he met as a friend and he always took care of his friends."

The statement continued to read, "We will celebrate Riley's life and never forget the great works of music, charity, and love that he left behind. You, the fans, meant so much to him, please know how special you are. If you have a memory of Riley please share it, no matter how small, as we remember him."

The band asked "for privacy during this time" and urged fans to "please send donations to Dallas Hope Charities" in lieu of flowers. Funeral and visitation arrangements are pending, while the cause of death is not immediately given. 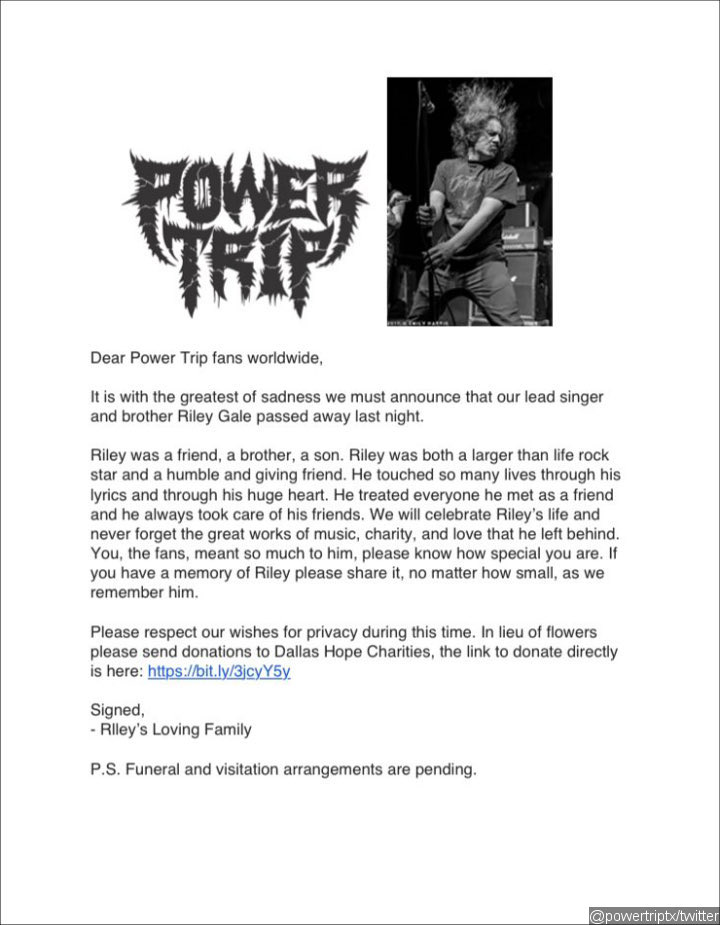 Following the news of Riley's passing, Ice-T, who just collaborated with the vocalist on a song titled Point the Finger", can't hide his sadness as writing, "I just got the news.. He was only 35.. I'm devastated.. Still don't know how... I'm speechless. So Fd up.. smh."

The punk band Code Orange also paid tribute online, "Rest In Peace Riley. you made a huge dent in heavy music history that will last forever. our deepest condolences to his friends, family and the guys in @powertriptx."

Slipknot's drummer Jay Weinberg tweeted, "I only had the good fortune of meeting him once, but he had a way of making you feel like you'd known him forever, instantly. Such a profound loss," while rock band Citizen called Riley's death a "devastating loss for so many."