The 'Level Up' singer, who gave birth to son Win in July, takes to her Instagram account to tell her online devotees that she is 'going to work really hard' to achieve her goal.

AceShowbiz - Ciara has gotten candid about her plan to shake off her postpartum weight. One month after giving birth to her second baby with husband Russell Wilson, the "Level Up" hitmaker took to social media to cheer herself up as she vowed to work hard to lose 48 pounds.

On Monday, August 24, the "Goodies" singer shared her fitness goal with her 26 million followers on Instagram. Posting a close shot of herself, she exclaimed, "48lbs to go! Starting the game plan tomorrow!! P.s. don't know how easy it's going be considering 3 baby's now!" She went on promising, "Going to work really hard at this! Let's go Mamma's."

Ciara's post has since received supportive comments from her fans. One raved, "Take your time!!!! Do it in your time!!!!!!" Another encouraged her, "You got this mama Ci you can do anything you put your mind to. You are a living testament of that. @ciara." A fellow mother called her an inspiration by commenting, "You got this, Ciara!! I have 3 but you've been my inspiration." 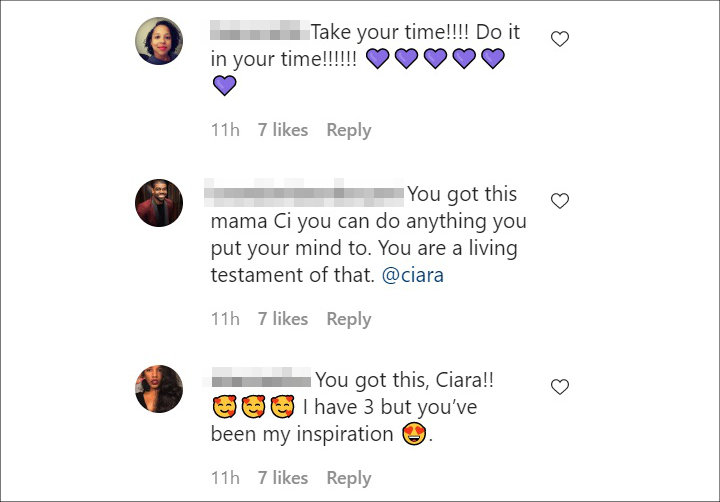 The 34-year-old welcomed her third child on July 23. Through a heartfelt Instagram video she shared two days later, she could be seen singing to her newborn in the hospital while wearing a black mask. "Happy Birthday WIN!!! Mommy & Daddy Love You! Win Harrison Wilson 7.23.2020 8lbs 1 oz," she wrote in the accompaniment of the clip.

Ciara's football star husband, Russell, also shared the exciting news using his Instagram account. In his post, however, he shared a photo of their baby boy napping on his wife's chest as he and his wife posed with a wide smile for the camera.

Baby Win was Ciara's second child with Russell. The two of them also share a three-year-old daughter, Sienna, together. She also has a six-year-old son, named Future, from her previous relationship with rapper Future.

Ciara Follows in Oprah Winfrey's Footstep to Be Weight Watchers Ambassador Post-Baby No. 3