The makeup guru is blasted for misleading fans with his clues regarding the artist he's collaborating with for his recent transformation video by calling the fellow YouTube star a 'celebrity.'

After he uploaded the video, James took to Twitter to reveal fans' negative reactions. "I said today's collab was with someone I I waited two years to work with & I was so excited for and now I'm getting death threats because stan twitter assumed it would be their fav and it wasn't," he tweeted on Friday, August 21. "there are a TON of huge artists I'd love to film with one day, be patient!" 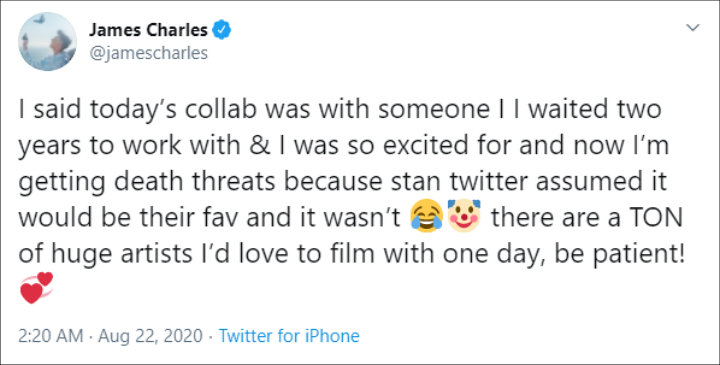 The makeup artist blasted the critics.

Despite James' explanation, Twitter users would not stop bombarding James with their complaints that he gave them false hope. Many of them were apparently angry that the makeup guru led them to think that the artist he waited two years to work with would be Ariana Grande.

"you also said it was a CELEBRITY. do you need me to pull up reciepts? jojo isn't a celeb," a disappointed user wrote. "i'll say it again you GAVE US THE WRONG MISS PONYTAIL," another echoed the sentiment, referring to the "Thank U, Next" singer who is also known for her signature ponytail.

A third user broke down the reasons why people had the rights to be angry, "things you did wrong; said the person you were collabing with was a 'celebrity'; said this collab was 'break the internet' worthy; said you waited 2 years implying this is an a-list celeb; liked tweets about ariana collab; we have a reason to be dissapointed."

"I'll say it again BYE SISTER," another responded to James' tweet, while someone else added, "he hyped it up so much liked the tweets about ari and said it was internet breaking and it was just another youtuber we have a right to be disappointed."

There were a few, however, who defended James, with one saying, "[JoJo] is a celebrity...he did wait 2 years...death threats have no excuses." Another wrote, "Why are people so pressed over this? Like the more people you collab with the better, you're showing support to all kinds of people who deserve it. I bet the video is great."

In the makeover video, James made JoJo remove her signature ponytail and big bow and replaced it with loose waves hairstyle. He also gave her a glam makeup. While JoJo loved James' "wonderful job," she said she would not keep it because "it's not me."

James Charles Backs Charli D'Amelio Amid Chef Video Backlash: This Is Not Sitting Right With Me