Twins Tim and Fred Williams are in disbelief that a human can sound like that after listening to the Grammy Award-winning singer's 2001 song for the first time.

AceShowbiz - Alicia Keys has laughed off a hilarious theory about her flawless vocals made by YouTube sensations Tim and Fred Williams. Days after the twin brothers went viral for their reactions to her singing "Fallin' ", the Grammy Award-winning singer playfully hit back at their claims that she was "a computer."

On Sunday, August 16, the 39-year-old singer turned to Twitter to offer her thought on being branded a "robot" by the 22-year-old twins. Confessing that it was not the first time she heard such reaction, she gleefully tweeted, "It's not the first time I've heard people call me a robot but I promise I'm not [crying-laughing emojis]." 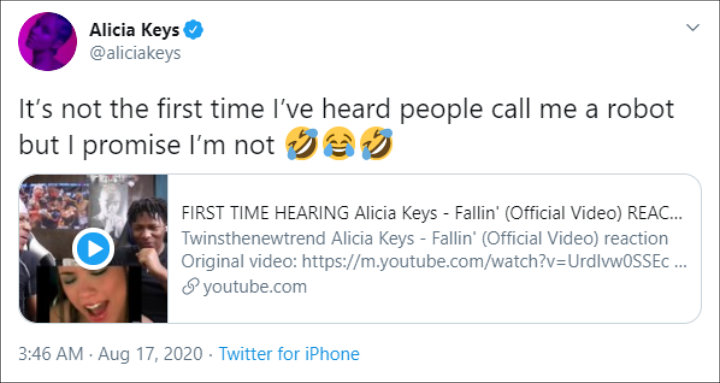 Alicia was referring to the Williams' reaction video titled "FIRST TIME HEARING Alicia Keys - Fallin' (Official Video) REACTION" that they posted on the video sharing platform in early August. In the nearly seven-minute footage, the twins tried to comprehend that it was a real human voice they were hearing, and concluded that she was a "cold-blooded killer" for her talents.

"Trying to figure out how you a person and your voice made like that? It's gotta be a robot. What? You gotta be a computer or something, bro," Tim was left in disbelief at some point in the video as he listened to the "If I Ain't Got You" songstress delivering her 2001 hit. He added, "I ain't never heard nothing like that."

"Fallin' " was Alicia's lead single from her successful debut studio album, "Songs in A Minor", which was released in April of 2001. The tune helped her to claim three Grammys for Best R&B Song, Song of the Year and Best Female R&B Vocal Performance respectively. 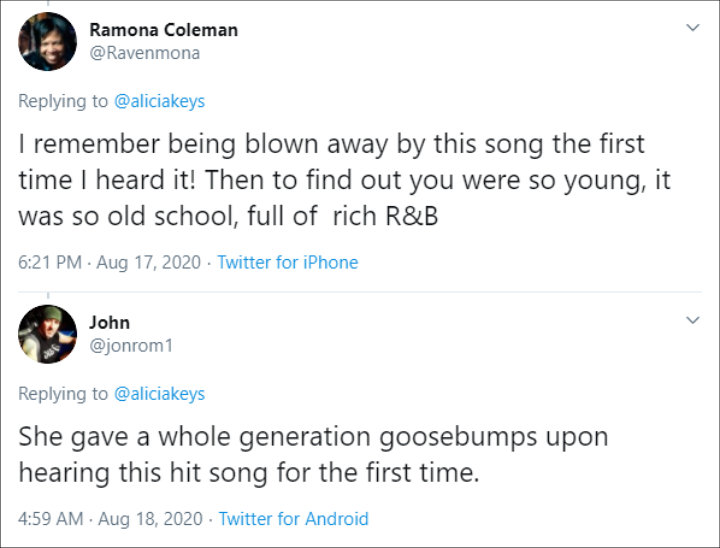 After Alicia came out with the playful tweet, a number of fans reminisced their initial reaction upon hearing her singing "Fallin' ". One wrote, "I remember being blown away by this song the first time I heard it! Then to find out you were so young, it was so old school, full of rich R&B." Another added, "She gave a whole generation goosebumps upon hearing this hit song for the first time."

Video: Black Trans Influencers Robbed, Attacked and Laughed At in L.A. Over Their Genders

Angela Stanton's Son Comes to Her Defense After Airport Confrontation With D.L. Hughley