Confirming the arrests of five men responsible for the killing of the 'Welcome to the Party' hitmaker, LAPD says they believe the suspects 'did not know the rapper personally.'

AceShowbiz - Police have shared more info about the men arrested in connection to Pop Smoke's murder. After confirming that five men, including three adults and two juveniles, have been taken into custody for their involvement in the rapper's death, the authorities have revealed the name of the adult suspects. 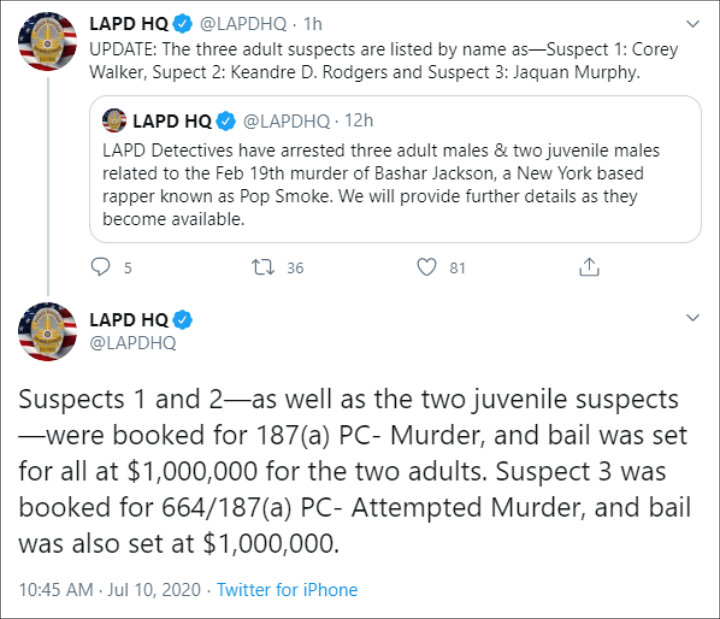 The LAPD additionally stated that they believe the suspects didn't know Pop personally, meaning the shooters didn't carry out a personal vendetta. "We believe that Pop Smoke posted his location on social media and that is how they found him," said captain of the LAPD, Jon Tippet.

"You have to know who he is in order to follow him and see the address on his story," a third person argued. "Who tf kills somebody because they bored....," another skeptical user remarked, while someone else added, "If they didn't know him why would you go to the address, lol ok."

A few others, meanwhile, believe the police's explanation that the suspects found Pop's address on social media. "I knew it! From that bag he posted. Gotta be careful, ppl are crazy and cold af!" one of them wrote. Another lamented, "Sometimes social media can be a curse. They are some sick ppl out there. RIP."

Some others began to spread conspiracy theories, believing that Pop's murder was an ordered hit. "Nahh his friends set him up...the killers don't have to know him to get hired ion believe it," one speculated. Another echoed, "That's cap y'all knew what y'all were doing it was all a set up and watch it be one of his girls that he was f**king with that set him up."

Pop, whose real name was Bashar Barakah Jackson, died on February 2019 after being shot twice during a home invasion in Hollywood Hills, California. PnB Rock recently insinuated that the "Dior" hitmaker shot back at one of the shooters, something which people hadn't heard before.

It's not clear though where PNB got the information from.