Also quick to honor the memory of the 'Devil Went Down to Georgia' crooner, who suffered a fatal stroke in Tennessee are Martina McBride, Travis Tritt, Luke Bryan, Luke Combs and Jake Owen.

The "Devil Went Down to Georgia" star suffered a fatal stroke in Tennessee at the age of 83, and the famed fiddler's celebrity friends and fans were quick to honour his memory on social media.

Among the first to pay tribute on Twitter was Paisley, who shared photos of the two artists jamming onstage together, and recalled saluting Daniels as "one of a kind" in a touching quote from a biography about the late musician.

"I wrote these words for Charlie's biography. They ring even more true now," he captioned the posts.

"I'm so sad he's gone. We have so many memories together, and I am so blessed to have known him. Rest In Peace my friend. We love you. @CharlieDaniels". 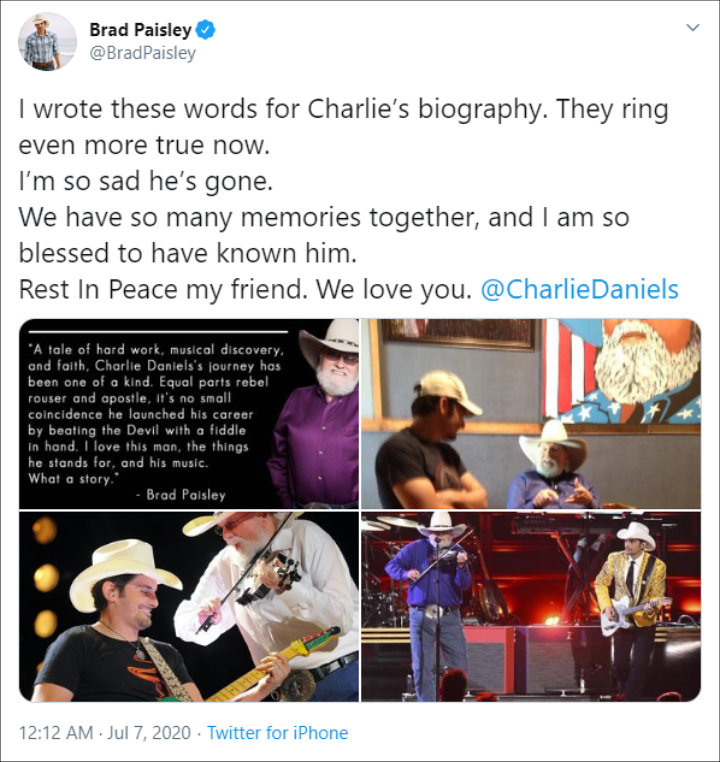 McGraw was another pal heartbroken over the loss: "Oh man, sad to hear about @CharlieDaniels passing...," he wrote. "I grew up on his music... brilliant songs and smokin' records. And always, without fail, every time I had the pleasure of being around him, he was one of most genuine, kind and thoughtful folks I've ever run across.

"The word 'legend' gets tossed around so easily these days, but not in this case... he was #BeyondLegendary..."

"One of my favorite people on this earth Charlie Daniels has gone on to his eternal reward today," added veteran star Ricky Skaggs. "Oh, how he will be missed at the Grand Ole Opry (country music Mecca in Nashville) and everywhere else he was loved."

Fellow country singers Martina McBride, Travis Tritt, Luke Bryan, Luke Combs, and Jake Owen also shared warm words about Daniels online, while Billy Ray Cyrus posted: "This #Legend @CharlieDaniels was at the core of my roots & influences in music. We recorded 'Just As I Am' together for his Grammy winnin Gospel Album... An honor to call him my friend. Fiddle's gonna be roarin in heaven tonight #RIP (sic)".

And Jason Aldean admitted Daniels' death was weighing heavy on his heart: "Man I am heartbroken to hear that Charlie Daniels passed away this morning," he shared. "He was one of the nicest/kindest people I have ever met. Thanks for the musical legacy u (sic) left all of us. We will miss you Mr. Charlie!"