The Nigeria native passionately tells off an online troll who leaves an uncalled-for comment on an Instagram video that sees him and his longtime love goofing off together in a car.

AceShowbiz - Michael Ilesanmi is not letting online trolls speculate negatively over his relationship with Angela Deem. Finding himself being accused of using his 53-year-old fiance to get a green card, the "90 Day Fiance" star sent a warning to one social media user to keep his opinion to himself.

On Wednesday, June 24, Michael and Angela posted on their shared Instagram account a throwback video of them getting silly together as they jammed out to music inside a car. Along with the video and a photo capturing the moment, they wrote in the caption, "Goofing with my [love emoji]."

The post caught the attention of one particular user who commented, "Oh my god. Michael all this s**t for a green card. Oh lord, this is torture." Bothered by the accusation, 31-year-old Michael fired back, "Dude. What's your problem? This is Michael. Is there something you [are] looking for or someone who hurt you?Why the hate? Please unfollow us OK, if you don't like what you see [shaking my head]."

The reality star went on to warn, "One more silly comment from you, I'll block [your] a** [I don't care]." When the user responded by stating, "Voicing my opinion doesn't mean I hate you," he quickly wrote back, "Bro, keep your opinion to yourself bruh. [I don't care] You don't know Angela and I, but from TV. So keep it to yourself. Thanks." 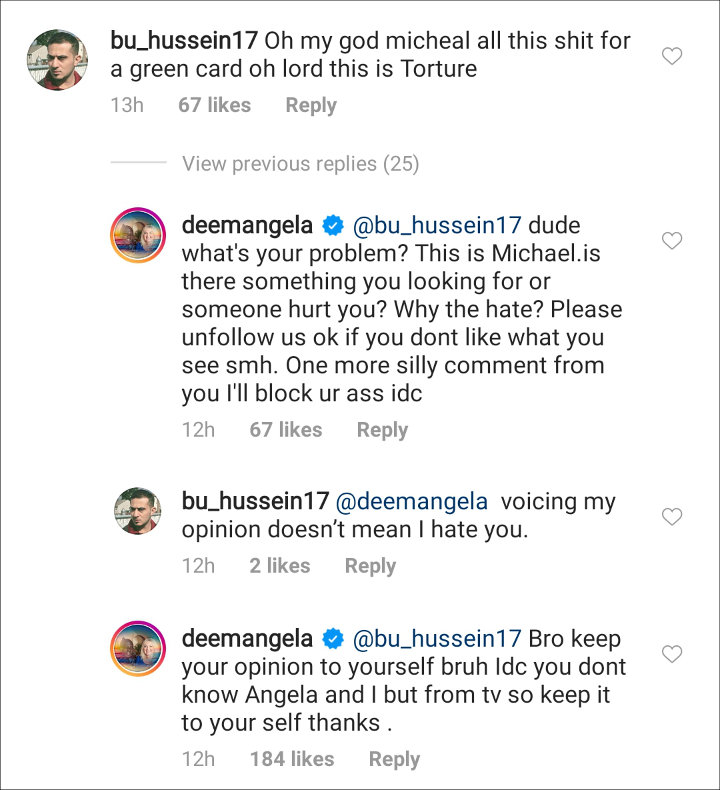 Michael warned an Instagram user for suggesting he is using Angela to get a green card.

While Michael told off the user for suggesting he just wants a green card, Angela recently admitted that she herself questioned his intentions at times. "Me being an American, maybe five percent or two percent when we fight thinks, 'Is it that?' But when I get my senses back, I really feel like in my heart that it ain't," she told Entertainment Tonight. "Now, we won't really know now, will we?"

"Because, you know, I've always thought in past relationships, you know, this is going to work," the Georgia native continued. "All I can tell them is to keep watching and if they're right, they're right. If they're wrong, they're wrong. I'm gonna stick by my man and I'm gonna fight for him and that's it. If I really thought he was scamming me, my a** wouldn't be going back over there."

During the chat, Angela admitted that after the ups and downs they have gone through together, "getting rid of him is not easy." She explained, "Because that's real love, you know? Let's face it, being on the show four times, he could've moved on a while back. I've learned that he really truly does love me."