The 'Riverdale' actress has slammed haters trying to get her co-stars to be 'canceled' in response to a string of seemingly false allegations of sexual abuse against them.

AceShowbiz - Lili Reinhart has hit out at online trolls attempting to get stars "cancelled" following a string of seemingly false allegations of sexual abuse against her "Riverdale" co-stars.

Over the weekend (June 20-21), an anonymous Twitter account with the handle @Victori66680029 accused Lili's co-star and ex Cole Sprouse of sexual assault at a 2013 party, with similar allegations made against his co-stars Vanessa Morgan and KJ Apa on other anonymous Twitter pages.

However, one of the accounts later tweeted, "Do you see how easy it is to lie and you guys will believe it? Vanessa Morgan and Kj Apa didn't do jack s**t. You will believe anything," suggesting the allegations were false, which has riled the actress.

"People genuinely infuriate me... and it's very hard to keep myself from exploding most of the time," she tweeted. "We live in a world of remarkably selfish human beings... Strive to be the kind of person who doesn't live in their own delusional universe. If you are not reflecting on your actions, you are not growing — you are not living."

The star insisted that, "there's nothing impressive about having too much pride," and urged fans to take a closer look at what causes them to behave in negative ways.

"Drop your ego. Take a look around. Take ownership," she continued. "You shouldn't brag about never being wrong. This is only proof that you can't be honest with yourself." 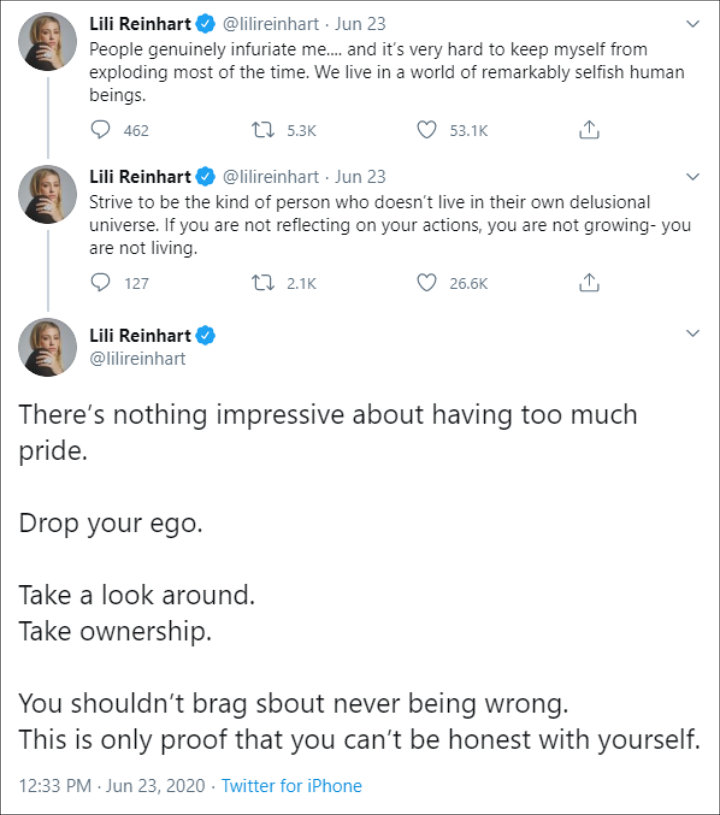 Cole previously insisted, "I take these accusations very seriously, and will be working with the right teams to get to the root of it," while denying the accusations, while Lili slammed the online user's actions, stating, "I can't think of something more twisted than lying about sexual assault".

Lili Reinhart Insists Bisexuality Is Not a Phase