Shortly after the 'Glee' actress got called out by her former co-star on social media for her alleged racist behavior, the meal kit company announces that it has cut ties with her.

AceShowbiz - Lea Michele is suffering the after effect of Samantha Ware's claims over her alleged racist behavior. One day after her former co-star publicly accused her of making the former's first television gig "a living hell," the actress portraying Rachel Berry of "Glee" found her partnership with HelloFresh being terminated.

The meal-kit company announced its decision to cut ties with the 33-year-old actress on Twitter. On Tuesday, June 2, it declared, "HelloFresh does not condone racism nor discrimination of any kind. We are disheartened and disappointed to learn of the recent claims concerning Lea Michele. We take this very seriously, and have ended our partnership with Lea Michele, effective immediately." 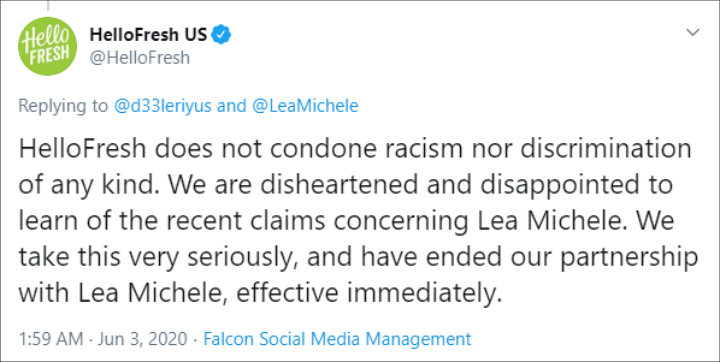 Michele last posted her Instagram ad for the company on May 20. At the time, she wrote, "So grateful for HelloFresh, now more than ever. Even though I'm just hanging at home, taking care of myself has become even MORE important. And HelloFresh delivers fresh ingredients and recipes we love, contact-free! Use my code LEAMICHELE60 for $60 off plus free shipping on your first box!"

The former girlfriend of the late Cory Monteith drew the ire of Ware after she tweeted her support to the Black Lives Matter movement. In response, her former co-star tweeted, "LMAO Remember when you made my first television gig a living hell?!?! Cause I'll never forget. I believe you told everyone that if you had the opportunity you would 's**t in my wig!' amongst other traumatic microaggressions that made me question a career in Hollywood…"

While Michele stayed quiet over the accusations, other "Glee" actor have jumped into the drama. Amber Riley shared a series of GIFs that got fans believing that she was addressing the issue in her own ways, while Alex Newell was more blunt in his reaction as he tweeted the "Get her, Jade" meme from "RuPaul's Drag Race".

Actor Dabier Snell, who made an appearance in a 2014 episode of the show, went further by sharing his own experience of Lea's rudeness. "Girl you wouldn't let me sit at the table with the other cast members cause 'I didn't belong there' F**ck you Lea," he tweeted. Additionally, Melissa Benoist liked Ware, Riley, and Newell's tweets.

Meghan Markle Addresses Racism Against Her Mom in Resurfaced Video