A fan attempts to assure them that they both can be good rappers without putting down each other, but Coi responds, 'I reached out to her !! I f***ed with her !! Never said anything bad about her.'

AceShowbiz - Rico Nasty and Coi Leray were involved in an online argument on Twitter. It looked like the beef started after Coi provoked Rico by saying that she looked better and made "BETTER MUSIC" than her.

"when you see me Just make sure you keep that same energy... I showed you love but you just can't deal with that I MAKE BETTER MUSIC THAN YOU , I LOOK BETTER THAN YOU, I DRESS BETTER THAN YOU , and never in my life I JOCKED your style," Coi wrote on Monday, May 25 on the blue bird app. Quote-retweeting the post, Rico said, "I haven't laughed this hard since idk when . I could hear ur lisp through this . Shut up d**k eater."

"Make better music .. lemme see ya streams and YouTube views . Have u went gold or platinum THEEF**K U ARE FAMOUS BC YOU SUCK A MEAN D**K WITH THEM BIG A** TEETH," Rico clapped back in a separate post. "Don't come over here making this s**t about me . I was minding my business . Tryna get s**t RITE with MY FRIEND."

Not stopping there, Rico continued, "All y'all can suck my d**k." Referring to a make-up artist that became friends with Coi after falling out with Rico, the latter added, "U wanna be cool with Scott so bad . I know so much s**t about u and I don't even kno ur a** . Keep my name out of your mouth . On god." 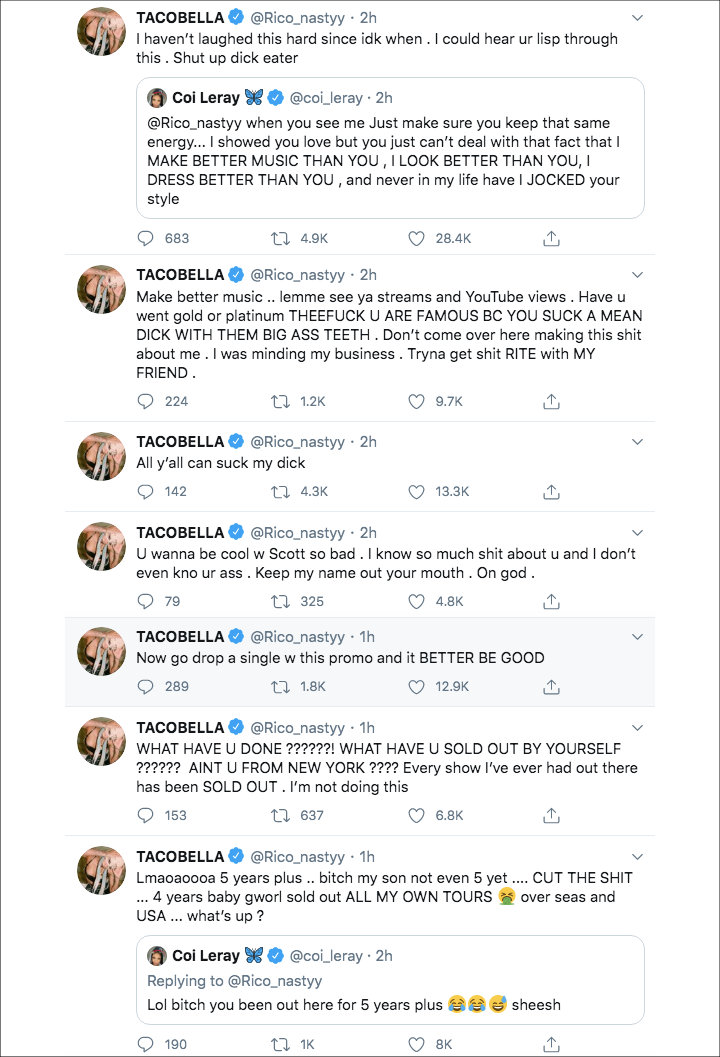 Rico Nasty and Coi Leray were beefing on Twitter.

She went on tweeting, "WHAT HAVE U DONE ?????! WHAT HAVE U SOLD OUT BY YOURSELF????? AINT U FROM NEW YORK ???? Every show I've ever had out there has been SOLD OUT . I'm not doing this. Now go drop a single with this promo and it BETTER BE GOOD."

A fan then attempted to assure them that they both can be good rappers without putting down each other. In response to that, Coi wrote, "I reached out to her !! I f***ed with her !! Never said anything bad about her but the way she speaking on me is WACK ... saying I 'take her style' B***H .huh?"

Rico has yet to comment on Coi's claim about her reaching out to her.

Lawyer of YNW Melly's Associate on Fans Hoping for His Release: You're 'Beyond Delusional'