Taken by her husband Steph Curry from their quarantine, the new Instagram photos show off her stunning body following 35 pound weight loss after giving birth to her three children.

AceShowbiz - Ayesha Curry has got nothing to hide with her hot mom body after giving birth to three children. The Canadian-American actress has stripped down to a bikini in some new shots taken by her husband Stephen Curry (II).

In the snaps, the 31-year-old television personality bared her toned abs in a two-piece gray swimsuit as she posed in front of the staircase. "Took me long enough," she captioned the post, crediting her husband as the photographer.

Ayesha also shared on her Instagram Stories another photo of her in the same bathing suit, but this time Steph was featured as he's the one who took the selfie. "Mom n dad," Ayesha simply wrote over it. 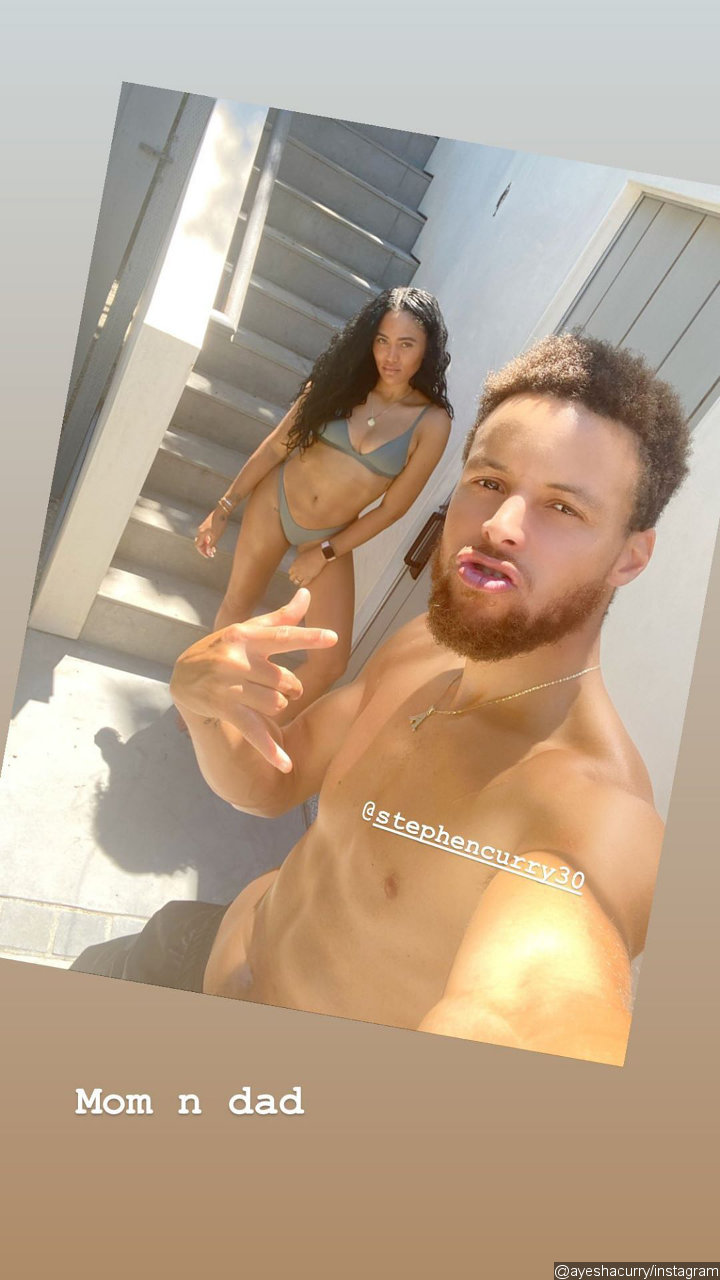 Ayesha Curry posed in bikini in photo taken by her husband Stephen Curry.

While many of her fans and friends were gushing about Ayesha's curves in the images, some people accused her of getting plastic surgery to remove her fat. "You went to Khloe [Kardashian]'s doctor," someone wrote in the comment section.

"i'm glad someone said it lol !!" another responded to the first commenter. Agreeing, a third user added, "Yea looks like she got buccal fat removal too." Someone else similarly noted, "I smell surgery. Looks good though."

Ayesha, however, later took her Instagram Stories to explain her journey to obtaining her stunning post-baby body. "I'm down 35 pounds, very happy to be. I spent my entire 20's having babies, nursing babies, now it's my turn to nurse myself," she shared. "Mommies need love too!!!! Been in the gym since January. Heavy HIT, hella cardio, floor work. And changed my entire diet (except for Sunday's…you know what it is) Will share more soon!"

Meanwhile, some others slammed the cookbook author and called her a "hypocrite" as they brought up her old tweet in which she called out women for baring their bodies. "Everyone's into barely wearing clothes these days huh?" read her tweet which dated back in 2015. "Not my style. I like to keep the good stuff covered up for the one who matters."

"And Just like that, Ayesha Curry just did the same thing she bashed other women for," one reacted to her new bikini pics. Another similarly added, "Ayesha Curry patronised [sic] other women for showing skin to men that aren’t their partner, then cried about not getting attention from men who aren’t her husband, and then went on a mad weight loss journey so she could post the same pics she acted like she was above."

Ayesha has not responded to the "hypocrite" allegation, but she had previously explained her 2015 tweet. "I was talking about someone walking around casually shopping in nipple pasties," she said when responding to similar criticism in February of this year. "I still find it freaking hilarious. But no one will everrrrr know."