Meanwhile, after multiple clarifications, the 'Born to Die' singer is constantly trying to explain her true intentions with her controversial remarks as she is accused of racism.

AceShowbiz - Doja Cat might be the only one musician whom Lana Del Rey mentioned in her controversial Instagram post that publicly reacted to it. Fans noticed that the "Say So" hitmaker wrote a cryptic message on her Twitter account before quickly deleting it, prompting fans to assume that it was her response to Lana's anti-feminist rant.

The said tweet read, "Gang sunk that dunker." The post wasn't up for too long since Doja removed it immediately. The singer, however, wrote part of the phrase in another tweet on Friday, May 22, saying, "Gang ______________. (Complete it)." Additionally, she changed her Twitter handle to "GANG?". 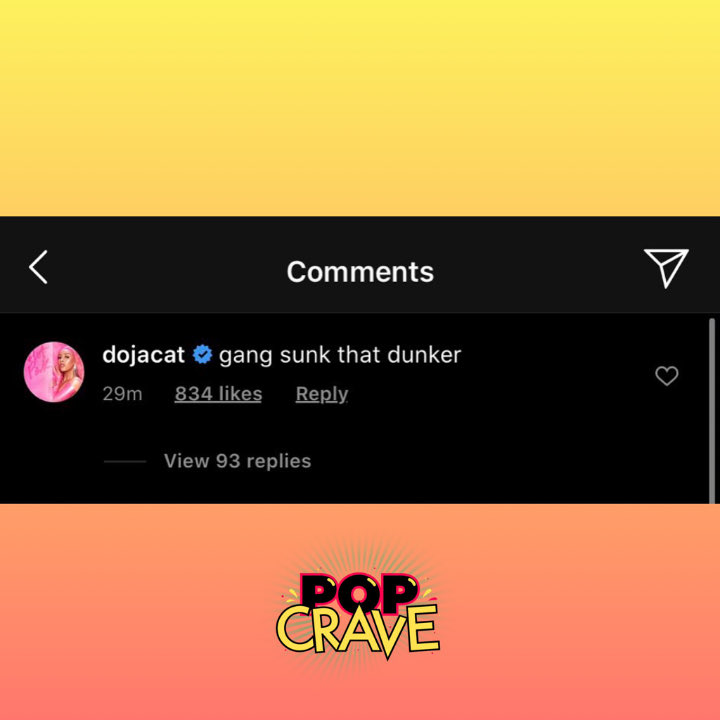 Fans, however, were struggling to decipher the meaning of Doja's tweet. According to a fan, "gang, meaning a friend and in this place referencing Lana. So Lana sunk, as in she landed, and dunker meaning the point trying to get across, (Imagine dunker meaning truth bomb). So Lana's points were made." Should this interpretation be true, Doja is definitely in team Lana.

Meanwhile, Lana is constantly trying to explain her true intentions with her remarks as she is accused of racism. After multiple clarifications, the "Born to Die" singer posted on Friday on her Instagram account "a couple of final notes on my 'controversial post' that's not controversial at all."

"Despite the feedback I've heard from several people that I mentioned in a complimentary way, whether it be [Ariana Grande] or Doja Cat - I want to say that I remain firm in my clarity and stance in that what I was writing about was the importance of self advocacy for the more delicate and often dismissed, softer female personality, and that there does have to be room for that type in what will inevitably become a new wave/3rd wave of feminism that is rapidly approaching. Watch!" she added.

"Perhaps I could've given more context to my post by mentioning the title of the second book that would be out next March called 'behind the iron gates- insights from an institution'," she continued. "I'm sorry that the folks who I can only assume are super trump/pence supporters or hyper liberalism or flip-flopping headline grabbing critics can't read and want to make it a race war, when in fact the issue was with *female critics and *female alternative artists who are dissociated from their own fragility and sexuality and berate more sexually liberated artists like muself and the women i mentioned."

"My aim and my messages are clear. That I have control of my own story. If the women I mentioned don't wanna be associated with me that's absolutely fine by me," Lana concluded.

Prior to this, Lana insisted that she mentioned Nicki Minaj, Beyonce Knowles, Camila Cabello, Kehlani, Doja and Ariana in her original post out of admiration. "To be clear because I knowwwwww you love to twist things. I f***ing love these singers and know them. #that is why I mentioned them I would also like to have some of the same freedom of expression without judgment of hysteria," she explained. "the singers I mentioned are my favorite singers. so if you want to try and make a bone to pick out of that like you always do be my guest."

Doja Cat Only Collaborates With Artists She 'Really Believes In'

Coldplay Pushed the Limits of Lockdown Rules for New Album