The 17-year-old raptress also comes to her boyfriend's defense after the 20-year-old is spotted lying in her bed in her new Instagram videos, insisting that they break no law in Atlanta.

AceShowbiz - Bhad Bhabie has confirmed her relationship with Yung Bans, sparking more concern from her fans. After she debuted a tattoo of the rapper's name, the 20-year-old songwriter has been found lying in bed in her new Instagram videos.

On Wednesday, May 13, the 17-year-old star shared on her social media site a photo and two videos to debut her newly-dyed blonde hair. "Hey yall...I'm a blonde now," she wrote in the caption, while the picture and clips barely focused on her locks, which were styled into a bun.

Instead, what gained people's attention the most was Bans, who was seen lying in bed with a sheet covering the bottom half of his body. He seemed to ignore Bhabie a.k.a. Danielle Bregoli, who was taking the selfie.

After the Boynton Beach star shared the photo and clips, people weighed in on her relationship with Bans, with many pointing out their age gap which makes it illegal in some States. "Bans know that's a charge right?" one person asked in the comment section.

But Bhabie insisted that they didn't break any law, considering the age of consent in Atlanta, where they hooked up, is 17 instead of 18. "a 3 year age difference can not make someone get a charge," she responded to the said follower. "damn y'all kids are dumb and know what the hell yall b talking about."

The "Hi Bich" spitter stressed in reply to another commenter, "in Atlanta it's [the age of consent is] 17." She additionally defended her relationship with Bans and spoke against the critics, writing, "I'm more than happy! I just don't like people speaking down on him for no reason I'm not gonna let no one do that PERIOD." 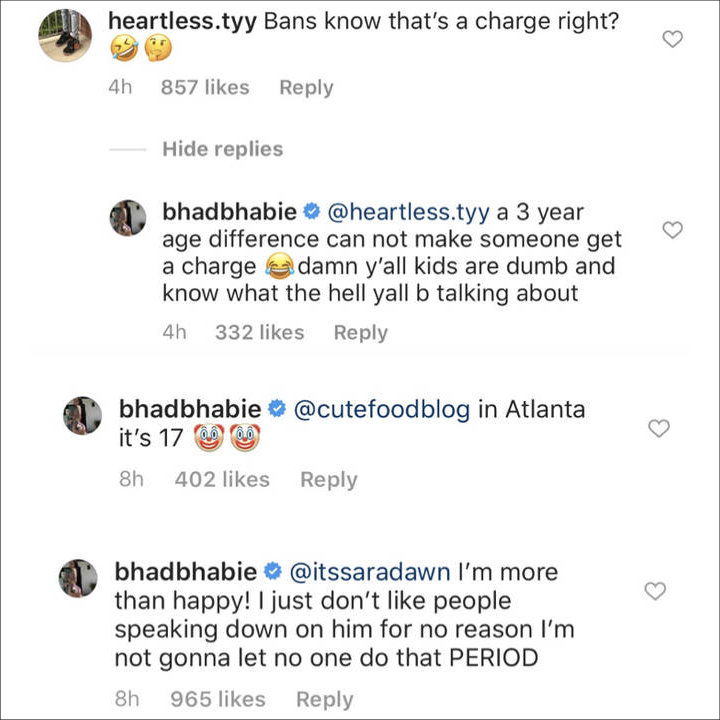 Bhabie first sparked Bans dating rumors after she showed off her brand new tattoo that says "Vas," which is the first name of Bans' real name, Vas Coleman. Bans later confirmed that it's a love declaration to him as he wrote on his Instagram Stories, "If you love me get my name tatted," along with a link to Bhabie's post.

Trina Sounds Off on Instagram Live: 'I Deserve A Lot More Credit'

Bhad Bhabie on Strained Friendship With Billie Eilish: She's Getting 'Too Big'